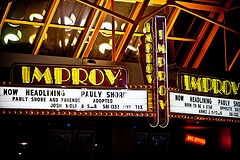 Right now you’re looking at the picture I’ve chosen to accompany this article and you’re likely wondering if I’m about to suggest you start getting up on stage at an improv comedy club. I’m not—unless you’re into the idea.

No, this is about the fine art of improvisation, the art of thinking on your feet and coming up with new, usable ideas on the fly. This is about being knowledgeable in your niche or topic and being able to speak on your podcast without a script. Improv can make your show… or it could break it. Here’s how.

The case for improvisation

Last year I interviewed Kim Ann Curtin for an episode of my Inside Internet Marketing show. Whereas all of my other shows are mostly unscripted, this series required me to come up with a list of questions or topics beforehand because it’s an interview format. You can’t go into an interview not knowing what you’re going to ask… can you? One of the things that Kim teaches is listening and interaction—how to really listen and use what you learn in a conversation to propel the conversation. Too often we just nod along with whatever someone is saying because we are thinking ahead about the next thing we want to say. Unbeknownst to Kim, I had nothing to ask her during the interview.

I started the episode pretty much the standard way. I introduced myself, read a pre-scripted bio to introduce Kim, and then mentioned the first time she and I met (she gave me a cupcake; very memorable). I then asked the only question I had to ask: who are you, Kim Ann Curtin? For the next 23 or so minutes, I listened intently to what she said and responded with questions that built on what she was talking about.

That turned out to be one of the best interviews I’ve ever done. It wasn’t because she was dropping bombshells all over the place or jumping on the sofa like a lunatic, but because we were so engaged that the flow, pace and content all lined up to create a great interview. After we ended the show and stopped recording, I told her what I had done and she was blown away that I would try something like that.

The lesson here? If you’re comfortable with listening, you don’t need to read from a scripted list of questions. You might not end up in the same place as you would with a script, and you might even go on tangents that you didn’t mean to, but if you are engaged with your guest, you will have a better show than if you nod your head with whatever your guest is saying while you’re queuing up the next question in your head.

The case against improvisation

Okay, raise your hand if you think that I was crazy for attempting that. That interview could have gone completely off the rails, right? What if Kim had been dull or if she was the kind of interviewee that reminds you of pulling teeth trying to get them to open up? We’ve all had conversations in our lives that just don’t really go anywhere, right? Going into an interview cold can be dangerous, it’s true.

Even worse though, is when you are so comfortable with your subject that you don’t think about what you’re saying as you’re saying it. Like I said earlier, almost all of my other shows have been completely unscripted. My Zap! co-host, Greg Hoffman, was my guest on another recent episode of Inside Internet Marketing. This particular episode wasn’t an interview, it was a recap of an industry event that he and I both attended the week prior.

We recorded the episode and I thought nothing of it. I posted it… and was greeted by several comments that I found odd. Things like “were we at the same conference?” that turned into quite a kerfuffle. I went back and listened to the show and carefully read the comments that I was getting. We were accused of being overly negative about the event—an event which everyone else thought was quite extraordinary. The thing is… they were right.

Greg and I had both been to several of these events in the past, and were very comfortable with them and with the people that organize and attend. We were too comfortable. As the host of the show, it is my job to make sure that the show stays balanced, informative and entertaining. That is, in fact, the only job I have! The episode was unscripted, we were two guys who were very close to the subject matter and it shows. Have you ever done something like that? It’s like when you go to visit a relative and you have a great time, but later on you’re talking with your spouse and you say “dinner was great, but did you see the living room? It was really messy!” In our case, we spent too much time talking about how the living room was messy and not enough about how great the dinner was… so to speak.

This is an example of improvisation completely destroying a show. Had we planned things out beforehand, we would have seen that the tone was too negative and that we needed to balance things out.

I’ve been more attentive lately, that’s for sure. I still believe in the power of improv because when it works, it’s awesome. For interviews and recaps of events, I am much more likely to have a list of questions or points to refer to. If I find that my show is starting to slide, I can bring it back or balance it out far more easily if I have some reference material.

Improvisation and spontaneity can be powerful, but like most tools in your toolbox, it can really hurt if you don’t use it properly.