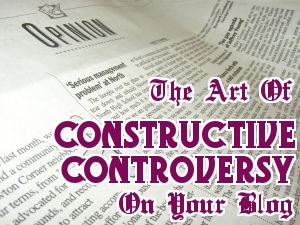 Without a doubt, controversy can drive tons of traffic to your blog. I do, however, believe that many if not most bloggers out there are going about this in a destructive way. Controversy is the cholesterol of the blogging world: there are both good and bad forms. Both drive traffic, but if you perfect the art of good controversy – what I like to call constructive controversy – you can reap the benefits beyond a spike in traffic that doesn’t stick and a plethora of emotionally-charged comments on a single post.

What is Constructive Controversy?

Constructive controversy is like constructive criticism; it can sting, but ultimately, the conversation is helpful. You could take a tone that is accusing or snarky if that’s the style you want to use, but you have to do more than pontificate. A constructively controversial post follows these guidelines:

The post “Why 150 Followers Is All You Really Need” from Srini Rao is old, but a good example of constructive controversy. Writing this post, Srini had to have known that some people wouldn’t like it. Most Twitter tips are about how to get more followers. But within the post, he used examples to back up his opinion, and the post was about starting a conversation about why we care so much about quantity and ignore quality.

Another great example is “Are Universities Giving Hall Passes for Hate” (warning: link goes to a post with strong language and is on a NSFW blog, though the post itself is SFW) by Erika Napoletano. In this post, Erica writes strong opinions about an event in the news, and not everyone in the comments section agrees with her. But it’s a post supported by facts and opens a dialogue. On Erika’s own site, Redhead Writing, she often publishes posts in this vein – very opinionated and very snarky, but also a way to get everyone talking about the topic at hand.

Whether or not you agree with the post has nothing to do with whether the post is constructive controversy or not. It’s about the goals of the post, not about the message.

What is Destructive Controversy?

Sometimes, these posts attack people, not for doing bad (or perceived bad) things, but for being female or gay or whatever the hate flavor of the day might be.

Usually, destructive controversy bloggers are the first to cry “free speech!” but often they heavily moderate comments to only include those that agree with the post. It doesn’t matter if a comment was constructive or not. Or, sometimes, these bloggers take the complete opposite approach and don’t moderate comments at all. They stay out of the comments section, just opening it to be a free-for-all between trolls and legitimate commenters.

Destructive controversy is usually really smart. The post is written to play on people’s emotions, fears, and ignorance. The goal is not to start a conversation, but rather to beat people down so the blogger can stand over the pile of bodies triumphant. Bloggers who write destructive controvery blog posts have, in my experiences, low self esteem and the need to stroke their own egos.

In some cases, the controversy is manufactured – the blogger doesn’t actually believe what he/she is saying or at least does not feel very strongly about the subject. It’s all rhetoric to bait people. Destructive controversy usually comes attached to a sensationalist headline. The goal is to get as much traffic as possible, simply for personal gain.

I’m not going to link you to examples of destructive controversy. You know who they are. It’s a fine line that some bloggers walk between constructive and destructive, but we’ve all read posts that were little more than troll comments (for the record, this is a really good post about what a troll is, because a lot of people use the term incorrectly).

Of course, I’m advocating that you write posts that are constructive, not destructive. But even if  you choose every word very carefully to be as diplomatic as possible, prepare for the storm that may be heading your way. If you choose instead to take a more accusing or even mean tone (and yes, you can still be constructive this way), prepare for the storm that is definitely heading your way.

A few facts about humans on the Internet:

So be prepared. It’s like a tidal wave – if you’ve written an interesting post that goes viral, you might see hundreds of comments in the span of an hour or two. If you lose control, it’s hard to regain it. Controversial posts are not posts you want to schedule to go live while you’re on vacation.

Controversy online, when done well, can lead to really interesting new ideas about topics that often divide people. It’s an art, though, to do controversy the right way, an art that I’m perhaps still learning myself. What’s important is not that you master this art before you publish controversial posts, though, but that you realize you’re a student. Aim to be constructive when you’re controversial, and you’ll be adding value to the entire online community and solidifying yourself as someone with a blog worth reading, not just dumping sludge on the Internet and basking in short-lived, negative glory.

Like what you read here? Subscribe to our RSS feed to get notified of all new posts via email or your favorite feed reader.