Good social media strategy is a recipe. When automation starts to get stale though, it’s time to mix up a recipe from scratch, starting with a base dough of promotion. Then you add in a cup or two or customer service and heaping tablespoon of retweets. Depending on your company, you might add other ingredients to the mix as well.

But many companies forget the most important ingredient of all.

In fact, anyone using social media to promote their content, products, or services need to add this important ingredient to their social strategy. Leaving it out is a disaster waiting to happen. 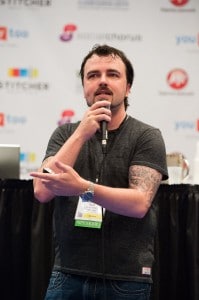 How Social Ranting Reminded Me of the Most Important Ingredient

I started writing this post in my head when listening to Scott Stratten rant about social media during his BlogWorld New York session, “7 Deadly Social Sins.” He admitted at the start of his talk that he would be ranting in this session about several social media practices that he sees all the time. These included linking Twitter with Facebook (and other accounts), being too stubborn to check out technology your audience is using just because you don’t personally like it, and trying to cover up mistakes instead of going with the flow. (You can hear his entire Super Session via the BWENY virtual ticket here.)

I’ve heard Scott speak several times, and what always strikes me about his sessions is that the audience does a lot of nodding and even applauding throughout. His talks aren’t typically about tools to use or how-to steps you should take or other specifics. They’re about broad ideas. He tells us what we already subconsciously know.

His sessions always seem to point out the most common ingredient that we often miss: common sense.

When talking about social strategy, I’m constantly reminded of the saying, “There is nothing more uncommon than common sense,” which dates back to at least the 1800s. It’s so easy to get wrapped up in squeezing the ROI out of social media that we often forget that social isn’t some kind of fancy new thing in the business world. The technology is new, to be sure, but at its core, social is really just basic human interaction.

These are Not New Concepts

Let’s think about business back in the days before social media.

In the early to mid 90s, when you were the coolest kid in school if you had Internet access at home, you didn’t get online to like your favorite band on Facebook (though MySpace days were right around the corner). Bands didn’t have a way to personally connect with you like they do today through Facebook, but they did have the ability to send you cool stuff in the mail via their fan club. Some CDs of the day even came with trading cards, and reality shows like Making the Band and appearances on MTV gave listeners the chance to “get to know you.”

In other words, it was about connection. Usually, the bands who made it big were the ones out there connecting with fans as often as possible. Sounds a lot like good social media strategy doesn’t it?

Let’s go back even farther to, say, the 1930s. There was no Pinterest for women to share their favorite recipes with one another, and no way for a company like Betty Crocker to build their brand on this platform. But you know what Betty Crocker could do (and did do) back in those pre-Internet days? They could recognize that the housewives buying their products would also be interested in other kitchen items, so they began putting a coupon for Oneida Limited flatware in every bag of flour. It was such a hit the later introduced a whole catalog of items.

In other words, it was about promoting related products that would interest their community, not just slinging their own products. Sounds a lot like good social media strategy doesn’t it?

Even father back in history, let’s talk about the 1700s. If there were two blacksmiths in town and your horse needed new shoes, how did you decide between them? Well, you probably asked someone you trusted and they gave you a word of moth recommendation. If you were one of those competing blacksmiths, you probably tried to treat your customers like they were special to instill a sense of loyalty and get those word of mouth recommendations.

In other words, you treated your audience as valued customers, not just dollar signs. Sounds a lot like good social media strategy doesn’t it?

In his book, The Thank You Economy, Gary Vaynerchuk writes, “How do people decide they like each other? They talk. They exchange ideas. They listen to each other. And eventually, a relationship forms. This process is no different for building relationships with customers.” It’s an idea that goes back to well before the days of the pioneers. People do business with people they like. Just because social media is thrown in the mix today doesn’t change that.

Common Sense in Your Own Social Strategy Recipe

So how can you take the idea of adding common sense and make it a reality? Here are my tips:

Above all, stay educated. This is the point of the post where I tell you to come to the Social Media Business Summit at New Media Expo to learn more about successful social media strategy for your business, but go beyond what we have to offer. No matter what your industry or niche, subscribe to blogs about social media like Social Media Examiner, pick up books like Scott’s UnMarketing and The NOW Revolution by Jay Baer and Amber Naslund, and yes, take the moment to go to events, classes, and seminars to learn how to be better at social. Common sense may be the most important ingredient, but staying educated about the other ingredients is important too.