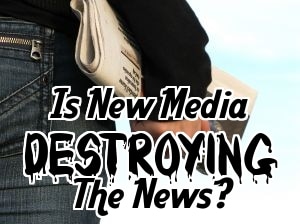 Yesterday, several politicians tweeted in celebration that Obamacare (new and controversial health care law in the United States, for those of you who are living in other countries and not paying attention to U.S. news) was repealed. The problem? It was actually upheld by the Supreme Court, not found unconstitutional and repealed. Mashable actually has screenshots of tweets from six politician, and these mistakes were later deleted when the real news about the ruling came out.

But don’t be too hard on these Republicans, no matter what your political persuasion. It’s hard to blame individuals when several media outlets on both sides of the political spectrum, including CNN, Fox, Huffington Post, and TIME all got it wrong too.

This is a growing problem in the United States and around the world – and as much as I love social media, blogging, and other online content, I think it might be new media’s fault.

The Race is On

One of the reasons newspapers are failing is that news reported this day is delayed. I subscribe to The Washington Post, but I have to admit that I rarely read the actual news, except local stuff about arts problems and the like. Op-eds are interesting, but when it comes to straight news stories, almost everything printed in the paper is stuff I already read online the day before. Being so connected means that I see breaking news when it is happening, and I don’t even need to leave Twitter for this information in many cases.

The world of news reporting online is extremely fast, and this need to be first is permeating other news sources as well. Everyone wants to break a story, and you know longer have days or even hours to do that. You have minutes. Sometimes, you have seconds. If you want to be the first source, you have to be incredibly fast or someone will beat you to the punch.

I think that’s what happened here. News sources like Fox and Huffington Post are pressured to try to report on a major news story first, and when that happens, mistakes are going to be made. It’s inexcusable to put speed before quality, especially when it comes to reporting the news. I can forgive a typo or even incomplete information, but it’s a harder pill to swallow when a story is completely wrong simply because it was more important to report first in the hopes of being correct than it was to spend a few minutes doing some fact-checking.

This is certainly not a new problem, as even before the Internet became such an important news outlet there were people who put speed before quality. I am, of course, reminded of the famous Chicago Daily Tribune headline “Dewy Defeats Truman,” which was published in 1948 even though Truman was the real victor in that presidential race. But I think the fast pace of the new media world has made large factual mistakes more commonplace. If you aren’t quick to report on a story, a million no-name bloggers, tweeters, and would-be journalists are already talking about it, and you’re late to the conversation.

A Culture of Not Caring about the Facts

More alarmingly, I think the new media world has created this culture of putting opinions first and facts second. Look at the incorrect tweet issue, for example. A politician, no matter how powerful, is not a news source, so the pressure to be first, as media outlets like CNN might feel, is absent. But just because you don’t have this need to be the first in reporting the news doesn’t mean you don’t have an inner need to post your opinions immediately.

This is, in my opinion, something that has invaded our culture due to new media. We don’t give ourselves time to think. We have this internal feeling of bursting if we don’t tell you want we think right now. Facts be damned.

Although several media outlets got it wrong in their struggle to be first on this issue, plenty of sources got it right. Still, the politicians called out by Mashable weren’t the only ones who tweeted incorrectly about the situation. This tells me that one of two things happened:

But why? Why the need to voice an opinion about something so quickly that you barely give yourself time to skim an article about it? At least TIME has a business reasons for being wrong – they were trying to be competitive in their industry where being first matters. But why do we as individuals subconsciously put speed before quality when voicing an opinion?

It’s the same thing that drive people, sometimes 20+ comments deep, to type “FIRST!” on a post by a popular blogger. It’s the need to be important.

Social media and blogging has made it hard to get this “fix” of feeling important. Before, you could say to your neighbor “I really don’t agree with the Obamacare ruling,” and they might say, “Oh really? Tell me why you think that.” Now, the answer might be something like, “Yeah, that’s what a lot of people on Facebook have been saying.”

If we don’t express our opinions quickly, our thunder is stolen. At least, that’s what it can feel like subconsciously (or even consciously).

So is new media destroying the news? Yes, in some ways, I think it is. We’re smack dab in the middle of a major media shift, and although there have been some definite improvements, the Internet is still an informational free-for-all. I don’t think this is a reason to dislike or avoid new media, but I do think that we all have to start taking more responsibility for what we say online so that we never let the egotistical feeling of wanting to be first overcome the duty we have to be correct.