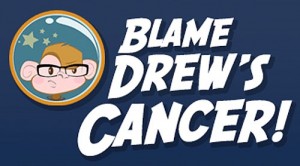 Two weeks ago my wife was diagnosed with cervical cancer. The hospital called us four hours after I stepped off the flight back from South by Southwest. For a few minutes, I didn’t know what to do, how to handle the emotions that were set off by the word ‘cancer’, and I needed to be there for Vikki.

Then I found my anchor. Drew Olanoff.

By that I don’t mean that he mysteriously appeared to hold our hands, but having watched him in his documented and public fight against his own cancer, rallying his friends around the hashtag #BlameDrewsCancer, and the subsequent work with the Livestrong charity, I had my life raft.

“That’s how Drew fought it,” I thought, “and I can’t think of a better example or guide than that.” Time has moved on, but those first few days I held on to the attitude of Drew while I learned to cope.

We found another benefit as well in being so open about the diagnosis. After speaking to our family and close friends, we posted the news online, through our blogs, through Facebook and on Twitter. And as the comments came in, with their mix of sorrow and best wishes, it was good to know Vikki (and I) have so many friends who are thinking about us, and supporting us in the fight. And of course we now have #BlameVikkisCancer.

Our communities online offer more than the words in the timeline or the Twitter stream, they offer support, they offer strength, and they offer reassurance.