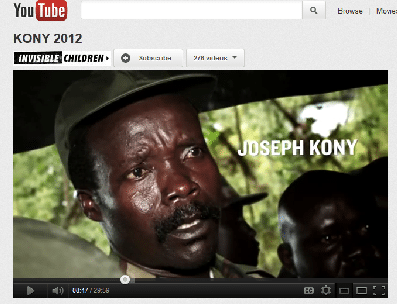 This morning, one of my friends posted a video called “Kony 2012.” I didn’t really take notice of it at first because I’m not a super political person, but it did catch my eye because I thought, “Hm, I don’t remember hearing anything about a candidate called Kony in her state.” Then I saw another friend post it. Then another. So I decided to watch it.

Thirty minutes long, and I watched every second of it. That’s not the norm for me, especially in the morning when I’m busy answering emails and getting set up for work for the day. I usually just don’t have the time. But for Kony 2012, I made the time…and I hope you will too.

Kony isn’t a politician; he’s a war criminal that is literally stealing children from their beds to he can arm them and force them to kill. I’ve heard of that happening, but I’m embarrassed to say I didn’t know his name, nor did I know that we’re talking about tens of thousands of children. And that’s what this campaign is all about. He’s able to stay under the radar because people have no idea who he is. We need to change that so he can be captured and brought to justice.

It’s a powerful message, but what I think is interesting is that we’re going to watch something even more powerful in real-time: the use of social media to make a huge change in the world. Already, through Facebook and other social media sites, Invisible Children has made a huge difference, gaining support to raise money, reach politicians, and get the world out about Kony’s crimes.

Twenty years ago, this wasn’t possible. Today it is, thanks to social media. That, to me, is chill-inducing and more exciting than just about anything going on in the new media industry.

I hope you’ll take the time to watch and pass on this video, as well as sign the pledge and consider donating to Invisible Children. What do you think of their social media campaign?