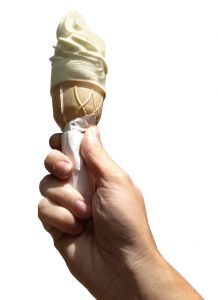 On a hot summer day, there are few things better than a sweet, dripping ice cream cone. There’s this little old school ice cream shoppe in my neighborhood that has the best flavors and homemade sugar waffle cones. It’s so yummy and refreshing that I don’t even mind when it melts in the sun and is impossible to eat without getting as sticky as a four-year-old. That’s part of the joy of an ice cream cone in the summertime.

Today is not a hot summer day. I’m not in the middle of a blizzard or anything, but it’s January in Northern Virginia. The nights are cold, snow is a constant threat, and we have a bag of rock salt waiting by the door just in case it’s needed.

Now, I probably wouldn’t say no to an ice cream cone right now. I love ice cream! But it’s not the same. During the winter, ice cream is still good, but it’s just not the same. As you stroll down the street with your favorite flavor, your fingers and lips get cold and it just doesn’t have the same refreshing effect.

The “if you build it, they will come” idea of blogging is a romantic one, but the quality of your content isn’t the only things that plays a part in your overall success. One of the factors that few seem to talk about is timing. You’re the ice cream maker. It’s up to you to serve your customers the best treats for the season. Some customers might still want ice cream during the winter, but you should at least offer some hot chocolate too.

Timing is about two things: research and your gut.

Ever wonder why so many products launch on Tuesdays or why Sunday night Facebook posts seem to get a lot more attention? It’s not a coincidence. There are certain days and times of the day that are statistically better than others.

When I was younger, I worked in a butcher shop and deli (sexy, I know). At the end of every month, we’d see a dip in sales – people didn’t buy as much because they were waiting for their social security checks or government assistance. So, my bosses would put the more expensive items on sale. The way, people could afford these items – and the tended to buy more. It was a well-timed sale.

Do a little research with your content. Test out your theories by releasing posts at different times and on different days and recording what happens. You can even set up split tests with your email lists to see when you get a higher open rate. The numbers don’t lie – and this could help you drive higher traffic number with little extra work.

Going with Your Gut

Sometimes, you have to throw research out the window. As much as it might make sense to announce your new book on a certain day or send out an affiliate email during a certain window or time during the day, don’t let your research cloud your good sense.

My birthday is in February. And I want ice cream. Normally, ice cream isn’t as good during the winter, but there’s an exception to this rule and if my friends didn’t bring out the ice cream just because it was “too cold,” I’d be very disappointed.

Going with your gut makes sense. When something is timely, release it while emotions are high, before people have the chance to cool off and stop caring about a topic. When your blog needs a pick-me-up, post sooner rather than later. When you’ve built up some anticipation for content, give the people what they want because if they have to continue to wait, they’ll loss interest. If you have a really innovative idea, post it!

Do research and follow the rules regarding the timing of your blog posts – but don’t be afraid to break those rules.

Personally, I’m still studying the best times to release new posts and when to follow the rules versus when to go with my gut and post immediately. Do you have a certain time you like to post on your blog? Do you think it matters?