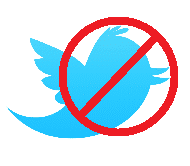 Like many social networks, Twitter is a very powerful platform for connecting people. While some of us might use it for nothing more than complaining about coworkers or sharing pictures of our lunch, others are using Twitter to take down governments and stop poorly-worded bills from becoming laws.

Yesterday, Twitter announced that it has refined the technology enough to censor tweets in specific areas of the world.

This doesn’t necessarily have to be a bad thing. We all have this knee-jerk reaction to instantly hate anything that even questions our freedom of speech concepts, but before you get mad at Twitter, think about what this could mean for us as content creators and social media users.

I think it’s important to start by understanding that Twitter isn’t going to just start wiping out your tweets willy-nilly. What they’re talking about is being able to block tweets on a country-by-country basis in order to comply with that country’s laws. Currently, Twitter already does censor some tweets that break United States laws – in most cases, that boils down to removing tweets that contain links to child pornography sites.

Some countries have very strict laws about what you can and cannot say publicly. Freedom of speech is not a world-wide civil liberty, unfortunately. Twitter isn’t creating these laws; governments are. I think public anger is a bit misplaced. We should be angry that governments are censoring their people, not angry that Twitter is abiding by these laws.

I won’t argue that censorship is a good thing, but I will argue that Twitter’s new ability to censor on a country-by-country basis is a good thing. Let’s use China as an example, since this is a country where Twitter is currently blocked. If Twitter wants to provide access in China, the company has two options:

The second option is much better! Could you imagine if everything we said on Twitter was censored by the Chinese government? The third choice, of course, is to simple continue denying access to China so that no one’s tweets were censored to any follower, but I think some access is better than none at all. Even if my followers in China only were able to reader one out of every hundred tweets, that’s better than the situation now. I’d love to connect to new people, even if it was in a very small way.

Now, Twitter is unlikely to actually pursue Chinese operations at the moment, given the country’s fiasco with Google a few years ago, but this is just an extreme example of how it could work in countries with different laws. And a launch in China is certainly not out of the question.

A Commitment to Human Rights

One could argue that Twitter should not censor tweets at all, that they should simply refuse to provide services in any country with strict laws that don’t provide for freedom of speech. I argue that this approach is cutting off the nose to spite the face.

First of all, I don’t think any company that provides non-essential services is going to change the mind of a government power that restricts Internet use. Government in North Korea, for example, has shown the world that it can and will isolate its people. They don’t really given a you-know-what if their people have access to Twitter or not. So by refusing to enter these countries, Twitter isn’t really doing any good in my opinion.

Third, this isn’t always a matter of black and white. For example, I think we can all agree here that spreading links to child pornography should not be protected under “freedom of speech,” and I’m glad Twitter removes those tweets. But from there, you can slope down to lesser and lesser “evils.” Where is the line drawn? Just because something is allowed by law in the United States doesn’t mean that other governments and cultures should have to conform to our standards. For example, pornography is illegal in many countries. Should Twitter boycott these countries the same as they boycott a country that censors tweets with negative opinions about the government?

Many major online companies, including Google, already censor their content in other countries to abide by laws, so this is nothing new. Twitter is just being extremely transparent about things, which I think is commendable. They plan to release information about who and where tweet censorship is being requested.

That could actually be a really positive thing for change in the world. It brings freedom issues to the forefront in people’s minds, both in the country being censored and in countries where people have more liberty to say whatever they want. So, censorship is bad…but Twitter’s move into countries where this is an issue could be good for raising awareness.

The concept of semi-censoring tweets is not without its problems.

Will Twitter simply listen to what a government official says, or will it allow tweets that aren’t breaking the law, even if a take-down is ordered? For example, what if the U.S. government decided to censor all the SOPA tweets earlier this month? Those tweets should be protected under the constitution, but if a take-down was ordered, would Twitter simply comply? Given the fast-paced nature of Twitter, the amount of time it would take for a tweeter to challenge something like that would make it a moot point. If tweets about SOPA were reinstated after the bill became a law, for example, it wouldn’t really matter.

And I also worry about misinformation. When someone is only seeing part of the story, ideas and facts can get dangerously warped very quickly. If someone is only see some of my tweets, they might form a very wrong opinion of me. Worse, it allows a government to have a lot of control on the message. If 99% of tweets about your leader are positive, is it because 99% of people actually like this person or because almost all negative tweets were caught and removed by censorship filters.

I think, as content creators, we should be excited about Twitter’s plans to expand into new countries, even if tweets will be censored. It means new followers, new connections, and new readers/viewers. However, it does mean that we have to think about our content a little differently.

With Twitter’s new ability to censor tweets in specific countries, our messages aren’t going to be seen in the same way by every follower. If you want to reach this new audience, it’s important to make sure that you’re tweeting in a way that allows your messages to be seen, and that might require a little research to learn about laws in other countries.

Let’s Keep Our Eyes on Things

This new power for Twitter does not come without responsibility. Whether we realize it or not, censorship on Twitter has already been happening, but now that it is easier to wipe out tweets in specific countries, I think all of us users need to band together and just…well…keep an eye on things. It’s now much easier for a government – even the United States government – for for Twitter itself to abuse these powers. It’s up to us to ask questions and keep those in charge accountable for the decisions they make.

Here are a few more posts with information and opinions on this topic, which I’ve quickly collected with the help of one of my favorite plugins of all time, Zemanta. Weigh in with your opinion or a link to your post about the topic by leaving comment below.