A couple of months ago I bought a new Ford Explorer (I love the SYNC system but that’s another post). Anyway it came with a free six month subscription to Sirius/XM radio. I have been a big Howard Stern fan for a couple of decades now but quit listening when he left terrestrial radio in 2006. So I tuned in to see what I had been missing all these years. 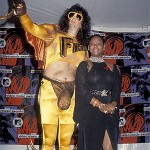 Guess what, I hadn’t missed a thing. The same cast of characters were all there. Baba Booey, Robin, Fred, Ronnie the Limo Driver and all the rest of the gang. But that’s just the crew. He has all the same fans too. Jeff The Drunk, Miss Howard Stern, Big Black, King of All Blacks, MaryAnn from Brooklyn, Eric the Midget, Bigfoot and scores of others. Yes new characters have joined the Stern community and some have left, but for the most part it was like stepping back in a time machine. It was like coming home to your crazy family’s house for Christmas.

I never called in, but as a listener to the show I always felt like I was a part of this community. I loved these crazy guys. Sometimes Howard offended me. Usually when he was being mean to someone he used to be friends with for one reason or another. Or some poor sucker who became the butt of his jokes. But like family you get over the things that make you mad and you still love them almost no matter what they do. You can even hear some members of the family trying to mediate disputes between other members from time to time. How many communities have members that are that dedicated to one another?

There are some very important lessons here. You can offend your community from time to time, but you can’t be fake. You have to be you and what they expect you to be. Howard does that like no other. Yes it’s a lot of schtick but that’s what we expect from him and he never fails to deliver.

If people really feel like they belong to a community, then it’s not just your community they are a member of. They are not just loyal to you, but to each other.

But there is more to building a community than that. Other people absolutely hate him. Have tried to ban him, are disgusted by him. Howard Stern knows how to elicit very strong emotional responses from people. I have heard movie stars, rock stars and regular schmoes cry, shout, throw things at each other they are so angry and laugh until their sides hurt.

Guess what, his community loves him all the more and will defend him in some cases to the death against those that hate him. If you were talking about anyone else you would say that last sentence was hyperbole. Not in the case of Howard Stern. No one has actually died yet, but if he asked don’t you think there are those that would?

People have gone to jail for him. Just to pull off a gag. That is a community that very few people can equal.

So this morning I see this story: Howard Stern personally calls Twitter fans on New Year’s Eve. Read the tweets from some of the fans Howard called:

OMG! It was like the best thing ever! I started crying after we hung up!”

This wasn’t that difficult to do. But how many celebrities do you know who would drunk dial their fans on New Years Eve?

Howard’s community loves him because they feel loved by him. He shows that love by delivering amazing content. Absolutely make you fall out of your chair laughing funny stuff. He makes people feel like they are part of a family. A family that needs to stick together because the rest of the world is out to get us. It is us against them.

By the way do you notice how many quirky members he has in his family? Do you think that is an accident? Yes he mocks them, makes fun of them, ridicules them he makes racist jokes constantly; but he also accepts them with all their flaws, all their differences. Some of these people are flat out crazy. But Howard accepts them into his community. All you have to do is accept Howard for what he is and you can be a part of this family.

You see anyone can be a part of this community / family. Most communities have some requirement to join, some common interest, some disqualifying factors. Howard’s community does too. Just one; acceptance. Howard Stern is a genius when it comes to creating content and more importantly in building community.

Do you agree or am I just being a fan boy?

Tagged with: Community Howard Stern King of All Media
Share