Christmas is a time for giving, and that’s true for your online communities as well as family and friends in real life. Just before the holidays started I was reminded of the connection that a show can have between the listeners and the producers. 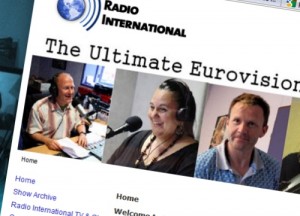 This time, I was the listener, and looking forward to the Christmas show from Radio International. It’s one of a number of sites based around the Eurovision Song Contest, and hosts a weekly podcast and radio broadcast in the Netherlands, and a few days before the festive broadcast I learned that JP, the host, wouldn’t be able to run the Christmas show – one that everyone was looking forward to.

Was it the same show that JP would have put out? I suspect not – a three hour show, with music, chat, and news has its own vibrancy derived from the host in the chair. Besides, I was sitting in the Belgian studio with JP’s music collection, but up in Edinburgh with a slightly more esoteric Scottish flavoured collection.

But with some help from many of the listeners I reached out to, a playlist was put together, guests were told of the new arrangements, and I sat down with a few spare hours and made sure that Radio International had their weekly show.

The community contributed to the show in the best way possible, and for me that was one of the best shows I have done. It also shows that everyone’s online shows are about more than a one to many broadcast – they are about personal connections, interactions, and friendships that flow in both directions.