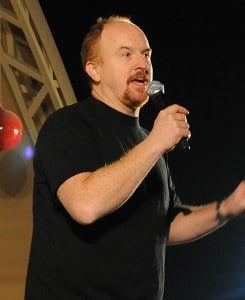 Louis C.K. has always published his comedy specials in a traditional way. He’s been quite successful, and I’m sure that there was no shortage of production companies wanting the rights to his latest special. Yet he chose another route – self-publishing on a website of his own.

He shelled out a ton of money to make it happen, but ultimately saw his investment multiply. And, while I’m sure people are still downloading his special illegally, the $5 price point made it a lot more accessible to fans on a budget.

Louis C.K. might not be a digital mastermind, but I think all of us online content producers can learn a few things from his success. You don’t have to be a celebrity to replicate what he did and find success of your own. Here are a few take-away points I think are extremely important:

Check out louisck.net, or louisck.com for that matter. They redirect to a purchase page. You don’t get some kind of splashy homepage or profile or store with tons of options. There’s no flash intro, no silly sidebar with links to everything under the sun, no long sales page. You get a link to buy his special. If you look for it, you can get to the news page or watch some videos, but the site isn’t cluttered with a million things to take the buyer’s attention away from doing anything but buying. If you’re going to sell something, don’t distract your potential buyers.

2. Save your fans from dealing with tons of annoying restrictions.

People pirate digital content. I’m not okay with that; everyone deserves to be paid for their work. But making buyers jump through a bunch of hoops to give you their money is just silly. On Louis C.K.’s site, he specifically addresses would-be pirates and talks about why he formatted his content the way he did, even if it does make it easier to share illegally. For him, it’s more about making it easier for the fan than making it harder for the pirates, and I think a lot of people responded to that and clicked the “buy” button because of it.

3. Give buyers a way to stay connected – if they want.

I hate when I purchase something and am automatically added to a mailing list. It’s really just one step above spam, if you ask me. On his site, there’s a mailing list, but you can easily opt out of it when you make your purchase. If you never want to hear from Louis C.K. again, no sweat. In fact the “No, leave me alone forever, you fat idiot.”* option is default. You have to make a conscious decision to add yourself to his mailing list. It’s respectful. Treat your fans that way too – let them decide whether or not they want to stay in touch before you fill their inbox with tons of emails trying to sell other products before they even know if they like the first one.

*his words, not mine!

Most people shy away from talking about their process. They just show you a finished product to buy and allow people to make the purchase. They definitely don’t follow up with sales stats in most cases. At least, not super specific sales states.

Louis C.K. took a picture of his PayPal account balance. He also talked about how much the special cost him to make, what he paid for his website, why he decided to sell his content digitally, and what he planned to do with the money. All of that makes me trust him so much more. It’s almost like your fans get to know you when you’re not only personable, but also transparent about the fact on your website.

It’s easy for your eyes to light up when you see big numbers, but let’s be honest; nobody needs a million-dollar salary to survive. Instead of keeping all the money he made, Louis C.K. was honest about what he really needed. He gave the rest to his employees (along with big bonuses) and charities. As a potential buyer, I’m more inclined to buy when I know that part of the money I spend is going to good causes. And it’s really attractive to know that the artist is deciding how the money gets divided, rather than a Hollywood production company, especially given the SOPA bs happening in Washington right now.

6. Let your fans get involved.

To go along with point number five, I also thought it was very interesting (and smart) that Louis C.K. crowd-sourced via Twitter to decide what charities deserved some of his cash. When you get your fans involved, it not only helps build community, but it’s extra press for your products. Every people tweeting with him was advertising his special to their followers. While I don’t necessarily think it was a marketing ploy on Louis C.K.’s end, I do think that he probably saw another small sales spike around the time he was interacting with people on Twitter, trying to choose charities.

7. Don’t pretend to be an expert when you’re not.

Lastly, if you’re not an expert on something, don’t “fake it ‘till you make it.” People will smell that bs a mile away! Louis, for example, is not technical genius. He doesn’t understand torrenting, and makes that pretty clear on his site (in fact, he makes a joke out of it which is even better). Do what you know how to do; you’ll sell more products and build a more trusting, loyal fanbase than if you claim to be some kind of expert when you’re not.

Even if you’re not interesting in buying you can check out Louis C.K.’s Live at the Beacon Theater page here to see a good example of someone selling their digital content in a positive way.