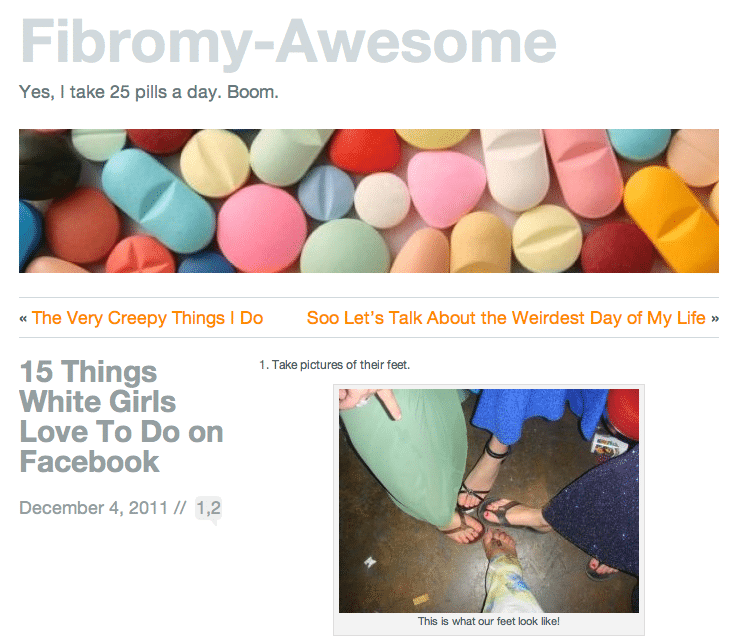 Yesterday morning I saw several Facebook friends sharing a link. 15 Things White Girls Love to Do on Facebook. It was an honest, hilarious, sarcastic look at some of the things people (or more specifically, white girls) post.

My favorite was probably #2.

Express their extreme annoyance at this work day today and hint that it deserves a much needed alcoholic beverage at the end of it. WINK WINK.

Subtly yell at no one in particular while being very specific. “Wow, it’s hard to believe that you think you know someone and then they turn around and STAB YOU IN THE BACK. Will never make that mistake again. EVER.”

Okay … I’ll admit, I laughed at every one. And maybe I cringed at a couple of things I have done myself.

It wasn’t until later I found out just how successful the post had been (2.3 million views in 3 days, 1.5 million views yesterday alone), and I reached out to Mary Gelpi (the girl behind 25 Pills a Day) to get her perspective. People often wonder how to get their post/video/podcast to go viral. I don’t know that it’s easy to replicate. In Mary’s case she had a post that was funny, easy to identify with, but one that also ended up pretty controversial. Many of the readers took the comments and conversation to an issue of race. Mary admitted in a follow up post, “If I would have known putting ‘white girl’ in the title would cause such an upheaval, I would have left it out.”

But then it might not have gone as viral!

Tell us a little about your blog. Why did you start it, and who is your audience?
I started the blog a few months ago because after losing my health, job, and apartment, I had a lot of time on my hands. One day I was like, hmmm, maybe I’ll start a blog. It was meant to document the almost pathetic life I was living (being 27 and living with my parents seemed like a laughable yet perfect backdrop) I also really wanted to create a source of community for other people who were sick and didn’t really feel understood.

How did you come up with the topic for the 15 Things White Girls Love to do on Facebook?
It took me about 10 minutes to write that list, which I thought MAYBE 100 people would read. My friend Kaitlin and I have this “book” that we scribble our ideas in all the time. One of our chapters is called “What Kind of Facebooker Are You?” The list stemmed from that idea and I just threw in the more recent things I see everyday on Facebook.

How did you learn that the post went viral? What was your initial reaction?
I came home from my A&P Final and casually signed on to see if any of my friends/followers had said anything. At that point I had 9 followers. When I saw the numbers I thought it was a mistake. I screamed. My mom asked what the ruckus was about. I told her, we laughed, and then we watched that movie Message In a Bottle.

Why do you think that it went viral?
Good question. I think it rang true to a lot of people. And then it made some people mad. Mostly I just think people like to laugh, and that’s what it offered-an easy laugh.

What do you hope that readers learn from your blog, and about you, and is there anything you will try to do to get them to come back?
There were three goals I made when I started: Make people laugh. Create some understanding about the illness. Show people how cool I think my dog is. I guess I’ll just keep trying to do that!