For the past few weeks, and especially over the past few days, everyone is talking about the Stop Online Piracy Act (SOPA), new legislation in the United States that seeks to punish people for posting pirated content. I didn’t pay much attention at first. The name sounds nice, after all. I don’t support illegal downloading, and I certainly don’t want people illegally distributing the content I create. So my first impression, when I started seeing people tweeting about it, was that people were mad that they’d have to pay for things they should have been buying in the first place.

Today, I had coffee with Thursday Bram. She was in town (I live in the Washington, D.C. area) to hear Alexis Ohanian, co-founder of Reddit, speak to the Young Entrepreneur Council – and he was in town first and foremost to speak out against SOPA. So I thought I better come home and actually read about the legislation, to see what the big deal was.

Holy cannoli. I almost had to change my pants. This video does a good job, in my opinion, of outlining the legislation and its problems:

Let me preface what I’m about to say with this: I’m not a lawyer and I normally don’t get super political. So if you believe I’m thinking about this the wrong way or don’t correctly understand what I’ve read about SOPA, please leave a comment telling me that. This is just how I’m interpreting things, and it is giving me an upset stomach, so I’d love to be wrong.

If passed, this legislation will scare people from sharing any link or user-created content at all because if the government (and those controlling the government though lobbyists) doesn’t like it, you can be shut down. I’m reminded of futuristic dystopian works of fiction like V for Vendetta and 1984, where government controls the message at all times. That might sound a little dramatic, but those type of imagined futures don’t happen overnight. They happen bit by bit, starting with legislation that seems like it’s meant to protect us (or so we’re led to believe). Legislation like SOPA. 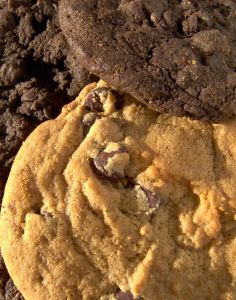 Basically, what SOPA does is create a way for content creators (anyone from a large movie studio to an individual artist) to fight piracy, which is a good thing. But it also creates tons of loopholes for content creators to shut down anything they don’t like or understand that they feel infringes on their rights. We’re trusting people – people who have a lot of money at stake – to ignore these loopholes. It’s like putting a big chocolate chip cookie and some carrots in front of a three-year-old and saying, “Honey, we trust you to only eat the carrots while I’m in the other room.” Yeah right.

The loopholes in this legislation will get abused. That’s a guarantee. They’re too tempting.

And not just that, but frankly, a lot of the people in charge of the government and even businesses don’t really use the Internet. They have interns who answer their emails and support staff who update their websites. We’re putting our faith to make good decisions about our industry in the hands of people who have no clue what this industry is about. That’s terrifying.

The Digital Millennium Copyright Act (DMCA) is supposed to protect us. Its “safe harbor” clauses give websites the chance to fix problems before being sued. Websites who make an effort to discourage copyright shenanigans don’t have to worry about getting being blacklisted. Essentially, if you try to do the right thing, you’re given the benefit of the doubt.

SOPA doesn’t give you a second chance. I’m not advocating that a piracy site should get one, but I am advocating that a social sharing site, including forums, blogs that allow comments, social media networks, bookmarking sites, and so forth be given the chance to rectify any infringement problems, rather than just being shut down because a reader/user/member/etc. posted something that a content creator doesn’t like. This is the kind of government blacklisting we’re seeing in places like China. That scares me.

Worse yet is the vast amount of gray area when it comes to infringement. SOPA will squash creativity like song mash-ups, spoofs, covers by amateurs, and more. Even stuff that is technically allowed by law could be at risk because people will be scared. Today, they’re taking down videos of someone covering a pop song. Tomorrow, they’re showing up at the small-town bar we’re you’re singing karaoke. Like I said, complete government control doesn’t happen overnight. Baby steps lead us down that path, a path where free speech is no longer allowed as we know it.

And to take things a step further…what about opinion pieces like I’m writing right now? It’s a leap, but if SOPA passes, could someone in the future read this post and categorize it as content that promotes piracy just because I disagree with an anti-piracy bill? Okay, yes, that’s quite a leap, but when writing this, I’ve been very careful to say multiple times that I don’t support piracy, just in case. Baby steps.

Let me not forget to mention how ridiculous the penalties are for someone suspected of promoting piracy in any way. A content creator can completely cut you off financially in as little as five days, which is not enough time for most people to defend themselves. You could even go to jail.

That’s right – jail. Up to five years. Because I posted a link to a YouTube video that uses background music without permission. Because that seems much more reasonable than just asking that the video be removed. Cue the black hood and handcuffs as I’m being dragged away by men in suits and sunglasses.

He's probably not a *real* pirate, right? Let's send him to jail just in case.

SOPA means that anyone who owns a website or creates any kind of online profile has to walk on eggshells. Part of the problem is that this legislation is so open to interpretation, that even if you aren’t doing anything wrong but just look like you might be doing something wrong, you could be at risk. Guilty until proven innocent is not okay in my book. There are a lot of innocent people out there who could get unjustly accused.

This legislation could even affect what you send via email, from what I understand. That requires a heck of a lot more email monitoring than I’m comfortable with. I’m not naive enough to think that something I send via email has no chance of getting read by anyone else, but I am un-paranoid-y (that’s a technical term because I can’t think of a better word) enough to think that right now, people don’t have a reason to care about my emails, so they probably don’t get read by “the man.” Under SOPA, email providers will have to care, and if you’re sending something that looks like an illegal link, the black hoods will come out again.

Up until now, I’ve been pretty outlandish with some of my what-ifs, but something that is very real and that absolutely will happen if SOPA is passed is that really cool start-ups won’t have a chance to succeed simply because they don’t have the manpower to fight lawsuits or police what users are creating to the high standards that will be legally required. Tumblr, Facebook, Twitter, Reddit, GOOGLE for crying out loud – these are all companies that couldn’t have happened if SOPA had passed before they were founded. People out there are wondrously creative and smart, and we’re going to miss out on a lot of really cool stuff because it will be too hard for these companies to gain any traction under SOPA. Take a moment to think of the crazy number of jobs that won’t be created. Sounds really awesome for the economy, right? Even some big-name companies might call it quits if it because too cost-intensive to comply.

A world without Twitter? I think I have to change my pants again.

And you know what? SOPA has all these bad effects WITHOUT STOPPING PIRATES. Even if every single pirate safe haven online gets shut down, people will find a way to get what they want if they don’t have the money for it. That doesn’t mean that we shouldn’t try to stop piracy, plagiarism, and general mean-spirited mischief online. It just means what we need to do so in a way that doesn’t blanket-punish all the good kids in class because one student was talking during nap time.

Get out there and write to your congressmen and women. Blog about it. Support companies speaking out against it. Educate people who are, like me, in need of education about the topic. Let it be known, even if it passes, that you don’t agree.

My name is Allison Boyer, and while I don’t speak for the rest of the staff here at BlogWorld, personally, I don’t agree.

I think I’ve ranted long enough, so now I want to hear your opinions. Has SOPA made you soil your undergarments? What are you doing about it? What do you think would be a better answer to online piracy?