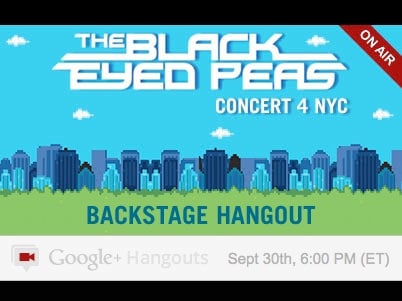 The Dalai Lama has joined Google+ and is hosting a Google+ Hangout tomorrow (October 8th) with Archbishop Desmond Tutu. It’s part of the Inaugural Desmond Tutu Peace Lecture in Cape Town, South Africa. The hangout is an On-Air Hangout, which means there is no limit as to how many can join. If you’re interested, tune in starting at 10:30am South African time (GMT+2.00).

As soon as Google+ announced their hangout feature, I knew it would be fun to see how everyone from businesses, celebrities, musicians and everyday people would use it. So far, it seems like people are getting creative and coming up with excellent ways to use the service.

Here are four ways the Google+ Hangout feature is being used (or could be used) and who’s using it:

1. To literally hangout – At the end of September, the Black Eyed Peas hosted a Google+ Hangout right before one of their concerts. They called it a “Backstage Hangout” and wanted to reach out to fans who couldn’t make it to the show. Band member Will.I.Am said he wanted to “redefine backstage interaction with fans”. It looks like around 74 people showed up to hangout.

3. Bringing people together around a certain topic – Food geek Lee Allison is bringing people together in their own kitchens who love food. He’s using the Google+ Hangout as a cooking school, as well as a chance to share your love of cooking from the comfort of your own home. He calls it The Social Skillet. He’s hosting a Halloween cookie G+Hangout! on October 27th and is inviting kids from their neighborhood to join in.

4. For customer service – Dell’s CEO Michael Dell posed this question on Google+ several months ago. He asked “I am thinking about hangouts for business. Would you like to be able to connect with your Dell service and sale teams via video directly from Dell.com?” It doesn’t look like they’ve hosted anything like this yet, but you can tell by looking at his Google+ profile that he has participated in several hangouts.

Have you used the Google+ Hangout feature? Also, what are some ways you would like to see businesses, celebrities and musicians use Google Plus Hangouts?

Google Buzz is Gone, Google’s Efforts to Go Towards Google+