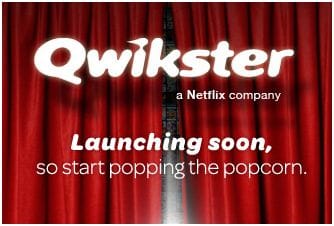 Netflix has been in the news quite a bit lately between their pricing changes and now the announcement their DVD delivery service is changing names.

Netflix’s DVD delivery service will now be called Qwikster, which is “coming soon”. The company CEO Reed Hastings said they chose that name because of their quick delivery of the DVDs. I’ll get more into the name change in a minute.

But first, this new name change causes a bit of a dilemma for Qwikster in terms of securing a Twitter name. @Qwikster is already taken by a Jason Castillo, who mainly tweets about girls, weed and words I can’t post here without adding lots of *****. His profile picture is that of Elmo smoking weed. I’ll refrain from posting any of his tweets here.

With the Netflix name change to Qwikster, Jason’s Twitter account has quickly gained more followers, obviously from people thinking they are following the new Netflix. He hasn’t posted since August 16th, so we’re not even sure if he is aware of what’s going on.

Do you think Netflix will try to secure this Twitter handle for themselves? It will be interesting to see what happens next, don’t you think?

Now, about the Netflix name change and splitting their business in two. Did you wake up to an email from Netflix CEO Reed Hastings this morning? Me too. It’s an apology letter of sorts, but also explains the reasoning behind all of the changes.

For those of you who don’t know what’s going on, in short, Netflix is splitting their business in two. Netflix will only handle streaming movies, while Qwikster is now the new name for their DVD delivery service. As Hastings said in the email, “many members felt we lacked respect and humility in the way we announced the separation of DVD and streaming and the price changes.”

He went on to explain what they’re doing and why, and ends the email with “Both the Qwikster and Netflix teams will work hard to regain your trust. We know it will not be overnight. Actions speak louder than words. But words help people to understand actions.”

You can see his longer explanation of everything on the Netflix blog here.

As businesses grow, they obviously have to go through changes, but has Netflix handled anything well? Sound off in the comments and let us know what you think!