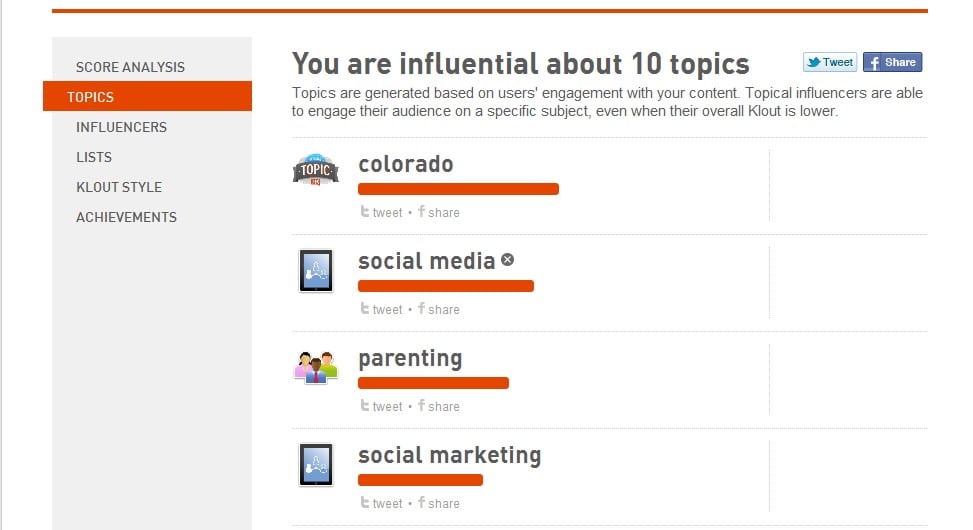 A few weeks ago I hopped on Klout and claimed their Topic Pages perk. They just announced today they’ve opened their Topic Pages beta to a wider audience, which now gives me access. Here’s a look at my topics. (Lower on the page it also says I’m influential about Elmo, which I think is pretty darn cool.)

Basically, Klout wants to be more than just a number, just a score. They want to provide their users with “more context about a topic”, meaning they’ll present you with a list of top influencers in a topic, regardless of what their Klout score is. It gives users more of an insight into top influencers, as well as those who have received the most +K for the topic.

Klout CEO Joe Fernandez told Mashable, “This is a big step for us in turning Klout into more of a utility around search and discover instead of pure vanity of checking your score. Our goal is just to understand what they are influential about and who they influence.”

They also plan to add “further analytics, trends, and related content over the coming months”.

Fernandez added that this is in the very early stages, but it stands by their belief that everyone who creates content has influence.

As I browsed around the Topic Pages, so far I like what I see. Of course, in order to be influential in a certain topic, you have to join Klout, which I know many have not.

What are your thoughts on the new Topic Pages and Klout in general?

Klout’s New Scoring Model Shows You Why Your Score Changed