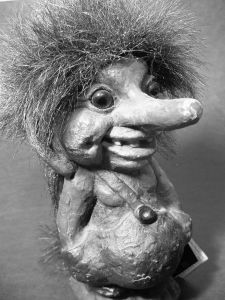 When you hear the term “troll” online, it is usually in reference to a commenter or forum poster who is hijacking the conversation with hateful and idiot comments to elicit a response from people. I think we can all agree that trolls stink, and the best course of action is typically to avoid feeding them and instead steer the conversation back to the original topic or even moderate heavily to control the mood of the conversation. But how do you respond when that troll is a blogger too?

Today, I read a post that was written purely to get a reaction from people. It was hateful and made claims that were unfounded, and the author freely admitted in the comments that he was hoping his post would get people talking. I’m refusing to link to it here because I don’t want to give that guy any more traffic, nor do I want to draw anyone involved with that debate to this blog. Trust me; the post was horrible, negative bile and you don’t need to waste your time reading it.

I come across posts like that way too often. I’m not talking about posts that are controversial – I love that kind of thing, even when I disagree with the author. I’m talking about really negative posts that are meant to anger people into commenting and sharing. Often, the author doesn’t even believe what he or she is writing. The goal is as much traffic as possible, leading to a bunch of comments that are really mean-spirited, while the author stands by smugly and occasionally prattles on about his/her “right to free speech.”

When I read posts like that, it makes me upset. I get emotional pretty easily, and it’s always hard for me to resist jumping into the comments to call the author and idiot and sharing the post so my friends can  do the same.

Except that exactly what the author wants.

Just like a commenting or forum troll wants to tick you off enough to make you respond, a blogging troll wants you to share the link and jump in with a comment, essentially turning you into a troll yourself. The author knows that nobody is going to defend their post. They might play all “woe is me” victim when people start attacking or they might even feign surprise that people are upset. But rest assured, they are sitting behind their computer screen giggling as their traffic explodes and giddy with excitement over every new comment. This is how a troll feels important.

The reason why this is such a good set-up for the troll is because it is a lose-lose situation for the reader. If you read the post and don’t respond, you haven’t added yourself to the side of good. You haven’t raised a voice against evil in the world. You’ve remained silent instead of standing up for what is right, and that doesn’t sit well with me or with most people. If you read the post and do respond, the troll is getting what he/she wants. You’ve been baited into replying, and even if you disagree in a respectful way, you’re lumped in with all the people who can’t control their emotions and leave hateful comments disagreeing with the author.

I sometimes think the best response is to blog about it, taking the conversation off the negative site and onto your own site, but even that isn’t the perfect solution, since you’re still giving that blogger traffic. Even if you don’t provide a link, curious readers will google it to understand what you’re talking about.

I’m not sure that there’s a right or wrong answer to how you should respond to trolls who blog. What do you think? Do you ignore the post? Leave a respectfully disagreeing comment? Leave a passionate, angry comment? Blog about it? Something else?