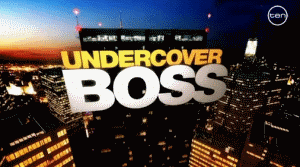 I was flipping through the channels early today and landed on a show I had never heard of before called Undercover Boss. The concept is simple – someone high up in management at a large corporation goes undercover, posing as a new worker in an entry-level position. At the end, their co-workers are surprised with the truth and hard-working employees are given awesome rewards. The company gets the added benefit of learning a little something about about how their business workers at the basic level.

The episode that was airing had Don Fertman from Subway posing as a “sandwich artist” (aka, the person behind the counter who makes your sub) at four different locations. It was comical to see others get frustrated with him as a new employee and heartwarming to see him surprise four deserving people with awesome prizes, like scholarships and vacations, after revealing who he really was.

One of the things I simultaneously love and hate about the Internet is that people are brutally honest. Most will speak their mind without a second thought because there’s the protection of the computer screen, which makes things seem more anonymous even though your name and picture could be right beside your comment. Brazen commenters can be a bit annoying, but as a business owner, you can also learn from them. Here are a few steps I recommend you take to go undercover online and find out what people really think about your company:

Oh, the problems that could be solved if only the management would read the tips people give about their companies online! The other day, I checked into a small family restaurant and the top tip was that people should “get there early for dinner because the wait is really long.” Obviously, the person who left that comment still thinks the restaurant is worth visiting, and even getting there early…but that doesn’t mean you should consider it a victory if you’re the restaurant owner. If the top thing people have to say about your restaurant is that the wait is long, think about ways you could solve that. Could you add more tables? Hire more staff to handle the dinner rush? Offer a happy hour at the bar that people can enjoy while waiting? Even if people aren’t complaining doesn’t mean that you can’t improve.

Some people lock their Twitter accounts, but most keep them public so others can see what they’re saying. Find your employees on there and follow them – under an anonymous name. If your employees see you following them, it may make them think twice before saying anything about their job or co-workers, so keep it on the down low and just see what they are saying. Do they think their boss is an idiot? Hopefully that isn’t you! Invite them into your office to talk about what they would do differently if in change. Do they promote your company even on their off hours? Reward them with an extra Christmas bonus. Do they tweet while at work? FIRE THEM! Just kidding – actually, take this as a criticism of how your workday is structured. Tons of tweets even though all the work is getting done might mean that your employee is bored working at a job below his ability level, for example.

You should definitely be doing this if you aren’t already. Monitor the conversation about your company and answer as many people as possible whenever you’re mentioned. It’s easiest to do this on Twitter, in my opinion, but you should also be responsive on Facebook and other sites that make sense for your niche. You can’t solve every problem, but you can show that you’re listening. And – this is important – actually listen. If a customer complains that the t-shirt your company sent was too small, the answer isn’t just to send him or her a refund. The answer is to send the refund and take a look at the sizing information on your website to see if it is accurate or post more information about your clothing running a little small in size. The point is not only to fix problems, but to avoid the same problems in the future.

How does your small business use social media to monitor the conversation and improve your products/services? I’d love to hear your tips in a comment below!