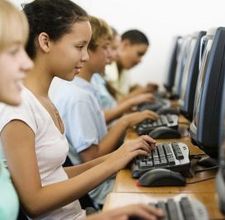 If you can’t beat ’em join ’em right? That’s the way a group of educators in New Jersey are looking at students’ love for all things social media. Instead of fighting it, they’re embracing it.

The Freehold Regional High School District has its own Twitter account, @FRHSD, and Superintendent Charles Sampson blogs on his own web page.

Teachers are also tailoring assignments to Twitter and getting student feedback on Facebook regarding curriculum. One teacher uses Twitter to post assignments and help students plan by using a Twitter hasthtag. The students can then update her on their progress and ask questions if they are having problems with an assignment.

“Students need to learn to work together to solve problems — schools heard a lot of that in the ’80s and ’90s from businesses and the community,” Language Arts Teacher Jeff Moore said. “This technology makes it so much easier for teachers to engage students. … It’s taking the school out into the real world.”

Now obviously this raises concerns for both parents and school staff. There was the teacher who was suspended from her Philadelphia High School when she called her students “Lazy Whiners” on her blog.

It’s situations like these that are causing schools to write up social media policies for teachers and staff. One Superintendent says he worries less about missteps like those and more about students being behind on technology.

He said, “I think schools are probably three to four years behind the rest of the world in how we’re communicating. I think we need to take more of an approach of being on the forefront of visionary tools. That’s what we’re doing this year.”

So what do you think – should schools encourage the use of social media and use it as a tool instead of fighting against it?