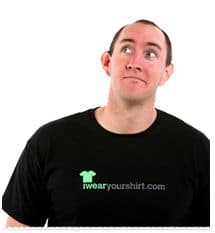 I was watching the Today Show this morning while answering some emails and sipping on my coffee, when I heard the t-shirt guy would be on. I was all ears.

I’m not sure if you’ve heard of Jason Sadler from iwearyourshirt.com, but if you haven’t you might want to keep reading. He’s taken advertising, social media and t-shirts (which all companies have right?) and rolled them into one extremely successful business. He’s creative. He’s brilliant. I love his story.

So basically, every day Jason puts on a different t-shirt and promotes the company he’s wearing the shirt for that day. He does this all via social media, but also while out and about. The man has to eat and go grocery shopping and maybe go on a date every now and then (if he’s not married).

As the Today Show said Jason is “a walking, breathing, internet savvy billboard”. Jason tweets, broadcast and interacts every day with his online audience.

During his interview, he said of his social media following, “They’re basically coming to consume an ad. Where does that happen? No where else. No one looks through the magazines and goes ‘hmm article. Oh, ad!’ That’s exactly what they’re doing with us”.

Jason obviously has an advertising background and he’s putting it to good use. He’s been in business for 3 years and has been so successful he’s hired four additional t-shirt wearers. He has one in Dallas, New York, Missouri, Los Angeles and he is based in Jacksonville, Florida.

Here’s the video from the Today Show segment where you’ll also see how his furry friend gets involved in the business as well.

Visit msnbc.com for Breaking News, World News, and News about the Economy

Amazing business idea isn’t it? I love stories like this and it’s proof that with a little creativity and social media, you can create a dream job for yourself.

What do you think of Jason’s story and does it inspire you to dream big?