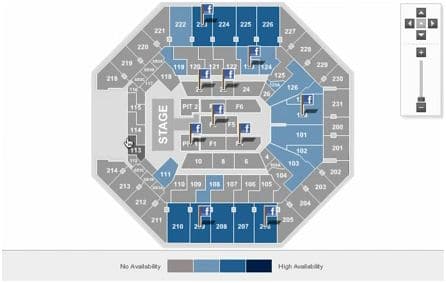 Ticketmaster has now integrated Facebook into its interactive seat maps, which allows you to tag yourself in a seat. You can let your Facebook friends know where you’re going and where you’ll be sitting.

You can share your plans with who you want – everyone, friends or even nobody at all. Once you connect your account, you’ll see a map infused with your Facebook friends (picture to the right) and where they are sitting. The miniature Facebook flags will let you know.

The feature is currently live for more than 9,000 Ticketmaster and Live Nation events.

Once you share your Ticketmaster seat tag on Facebook, whomever you decided to share it with will see a “Check out my seats” post. They can then decide when purchasing their tickets if they would like a seat next to yours. Or, possibly a seat no where near yours.

The idea of the Ticketmaster Facebook integration is to take ticket buying to the pre-web stage, Ticketmaster executive vice president of ecommerce Kip Levin told Mashable. “Online took away from the old experience of going down to the record store to purchase tickets. This is a way to go back to that.”

Here’s a video which shares the new Ticketmaster Facebook feature.

Will you use this new Ticketmaster feature to let your friends know where you’ll be sitting? Or would you rather them not know?