After Hewlett-Packard announced the death of the TouchPad and webOS phones, Microsoft’s Brandon Watson tweeted a message to webOS developers. Here’s a screenshot of his tweet. 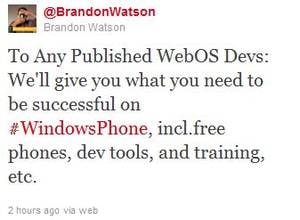 The large response he received was completely unexpected, causing him to make a change in the way he decided to respond to everyone. As of this morning, he has received over 1,000 responses. He tweeted, “Oops…@winrumors runs another article…@engadget too…email flood begins anew for Monday. Closing in on 1K #webOS dev emails”.

WPCentral obtained a copy of the email sent after Watson received around 500 responses.

“First things first. Thank you so much for reaching out to the Windows Phone team to signal your interest in bringing your talents to our platform. To be honest, we didn’t expect this level of response, so we were caught a bit flatfooted. It took a few days (on the weekend) to pull all the mails together into one place to allow me to respond in a smart way and not retype every mail by hand. Consider this a first step in building a relationship with the Windows Phone team. We are psyched to have you aboard and to see what your imagination can do on the Windows Phone canvas.”

Not only is Microsoft gaining some new webOS devs, but they’re also planning on working with students. In fact, Watson says they are going HUGE with students this year.

I guess the lesson here could be “Be careful what you tweet”!