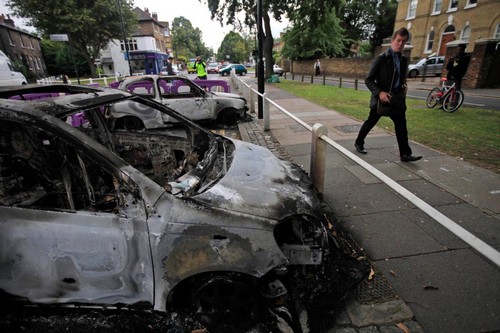 A man walks past burned cars in Ealing, west London, after a night of rioting, Tuesday, Aug. 9, 2011. In London, groups of young people rampaged for a third straight night, setting buildings, vehicles and garbage dumps alight, looting stores and pelting police officers with bottles and fireworks into early Tuesday. The spreading disorder was an unwelcome warning of the possibility of violence during London’s 2012 Summer Olympics, less than a year away. (AP Photo/Lefteris Pitarakis)

In a statement Facebook said, “we look forward to meeting with the Home Secretary to explain the measures we have been taking to ensure that Facebook is a safe and positive platform in the U.K. at this challenging time”.

The UK government is looking at the possibility of preventing suspected criminals from using social networking sites.

Cameron said, “We are working with the Police, the intelligence services and industry to look at whether it would be right to stop people communicating via these websites and services when we know they are plotting violence, disorder and criminality”.

This brings up some interesting issues and concerns among the public and free speech activists, as you can well imagine. Is this the same as the internet blackouts put on Egypt and Syria as some on Twitter are asking?