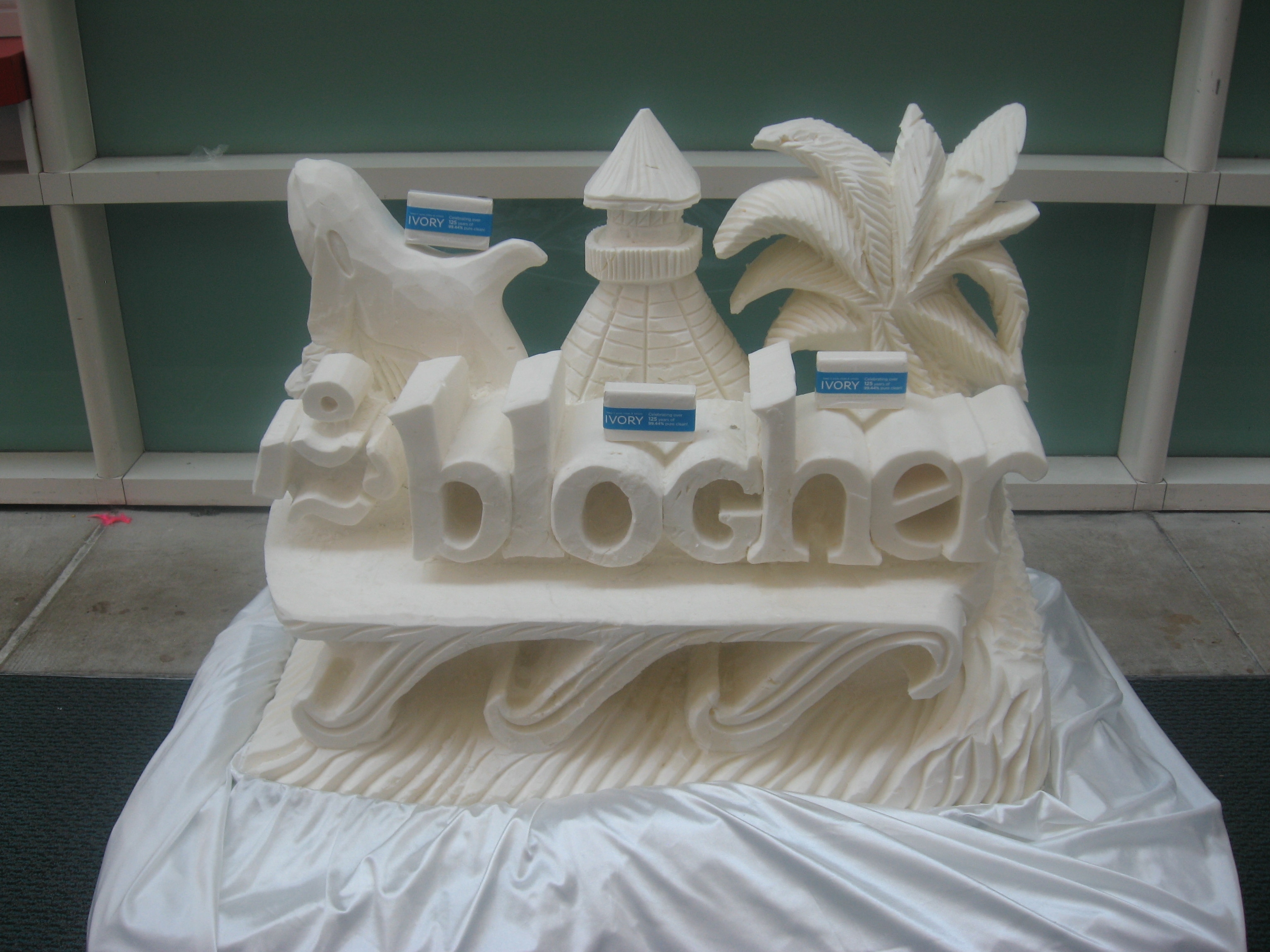 The BlogWorld team headed to BlogHer this past weekend, as you may have already read in my post about swag-grabbing. One of the things that really impressed me was how sponsors at this conference went above and beyond with their expo hall booths. If you’re considering exhibiting at BlogWorld Expo this fall (or any time in the future), this post is for you – take a look at just a few of the really cool exhibitors at BlogHer: 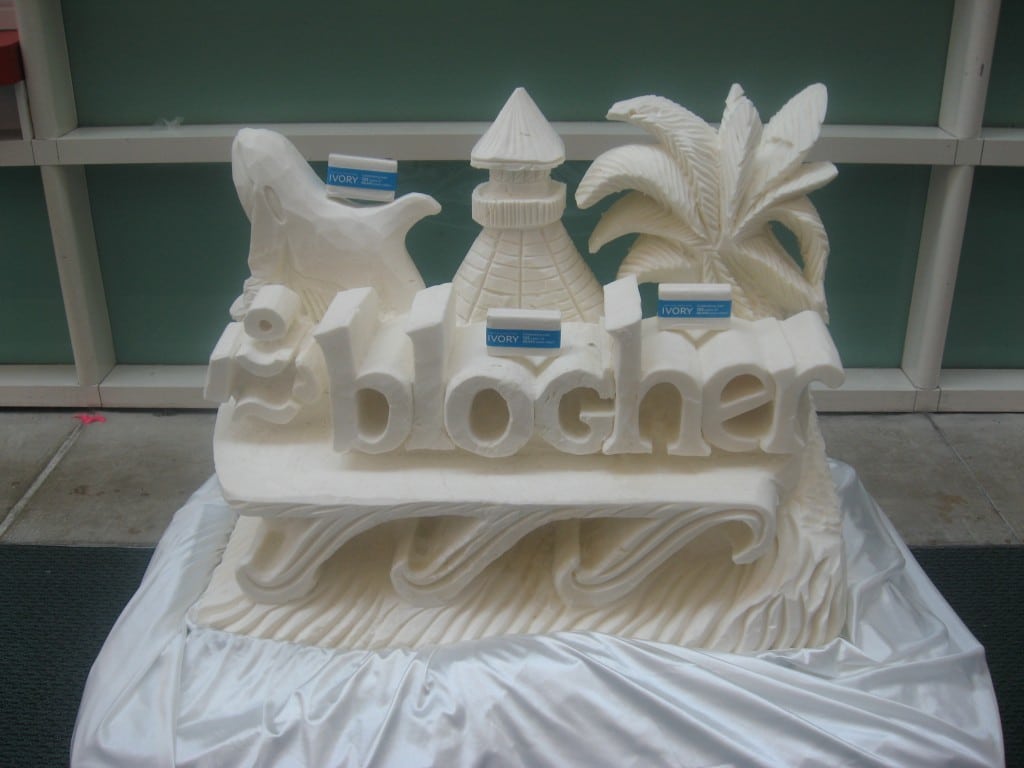 Ivory Soap didn’t actually have a booth at BlogHer (as far as I know – but I’m pretty sure I saw every booth there). What they did, though, was create something really cool that was sure to be photographed. I saw lots of people stop to take a picture of the soap sculpture, which was right by the door and registration desks. Every time someone posts a picture like the one here, it’s a mini advertisement for Ivory! 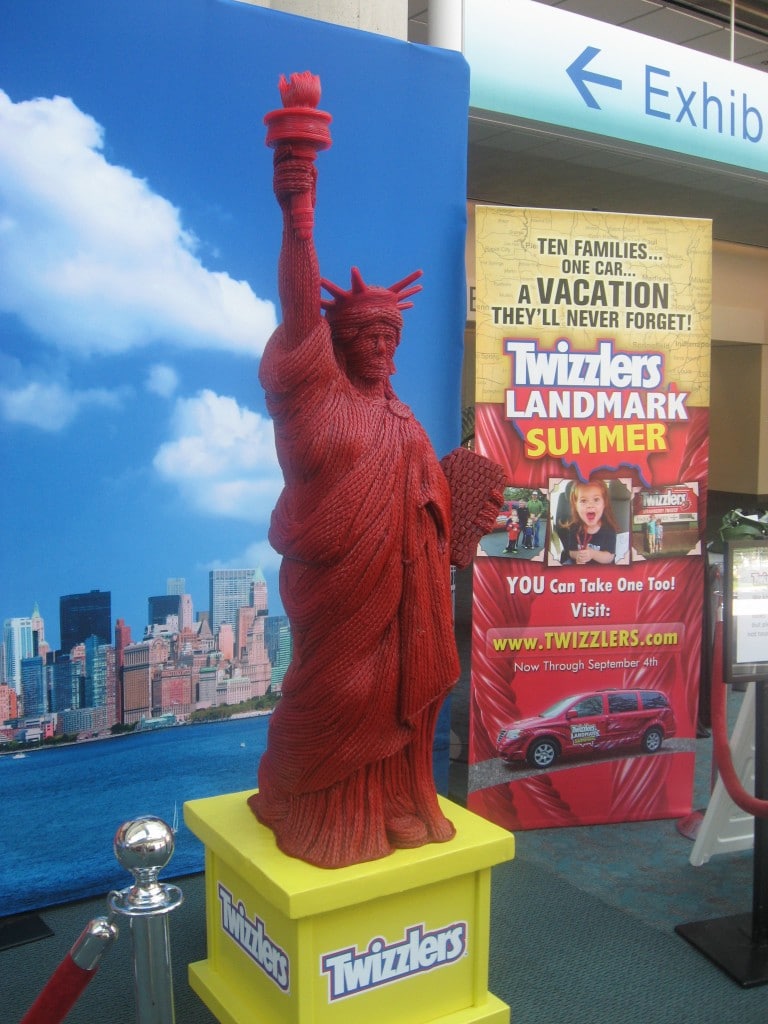 Like Ivory, Twizzlers did something super different that made a great photo op. They actually had cool Twizzlers sculptures set up around the convention center and the hotel. Again, every picture like this is a miniature advertisement for Twizzlers. 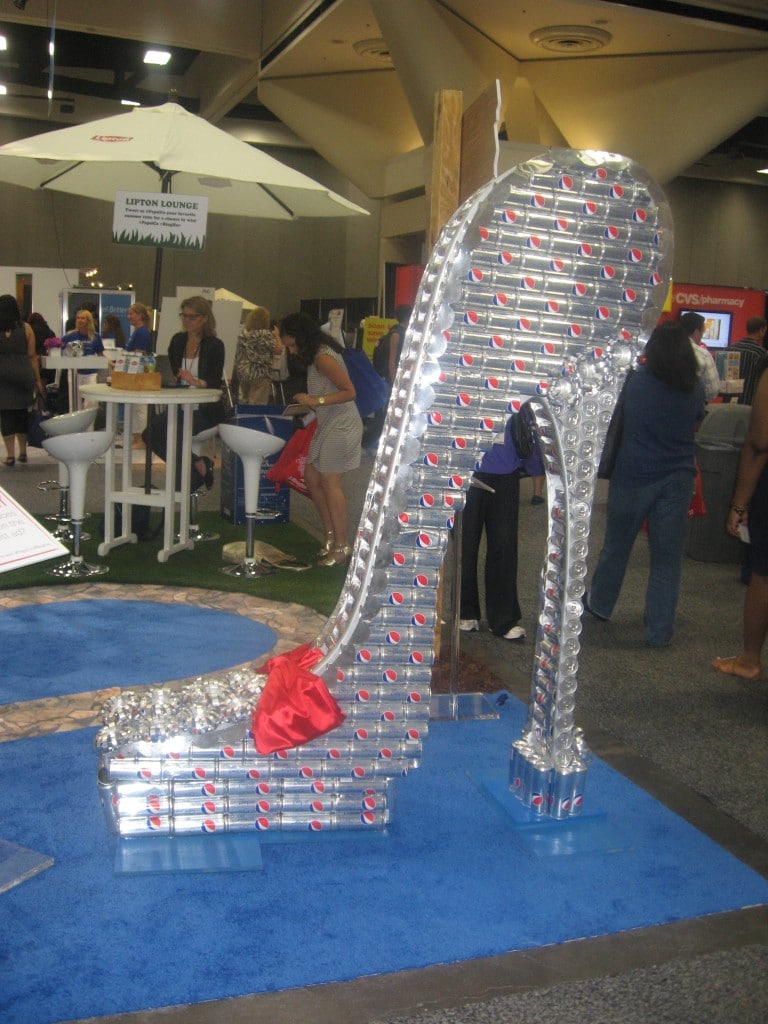 Another great photo op was inside the expo hall itself – this one by Pepsi. 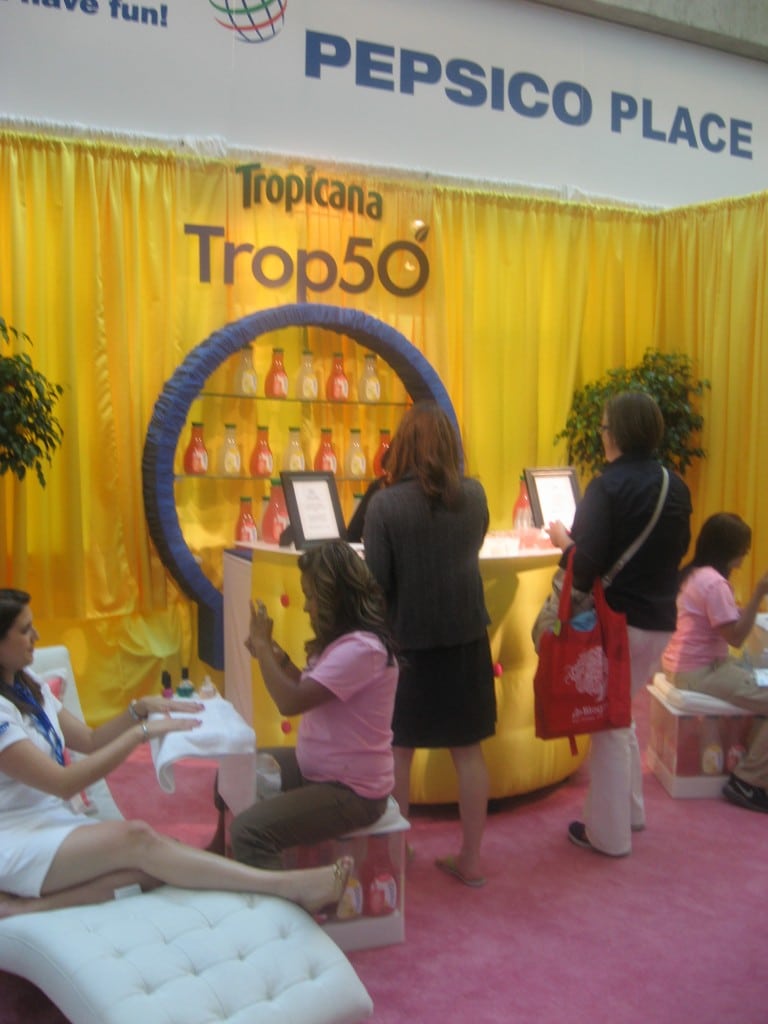 Tropicana not only had a visually appealing booth that used eye-catching colors, but they also attracted attendees by offering a free service – manicures. They were giving out free samples of their juice as well I believe, but unlike some of the other booths, which had expensive products for free, Tropicana didn’t have to spend much to purchase nail polish. And, while the girls got their nails done, it allowed the booth representatives to make a real connection with attendees while talking about Tropicana’s products. 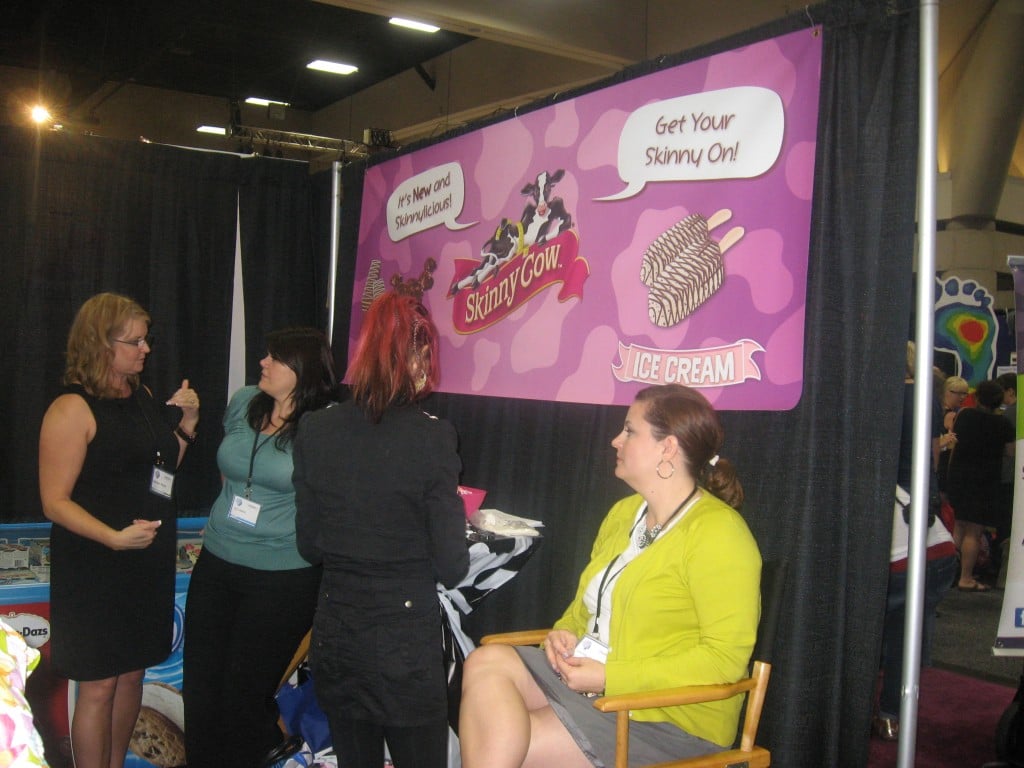 At Skinny Cow’s booth, they did have free samples of their products, but like Tropicana, they also have a free service to give away – false eyelashes. This also gave reps the chance to talk to attendees about their products on a more personal level. Plus, people were crowding around the booth all weekend to see what was going on. 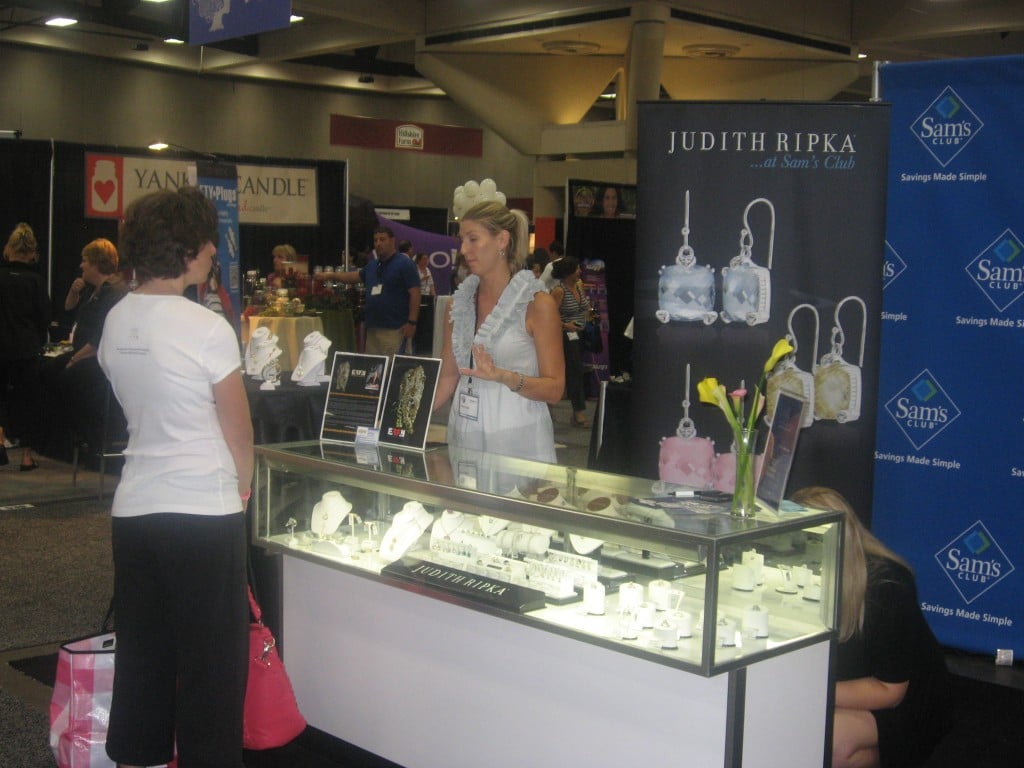 Sam’s Club didn’t have a service they gave away or even products for our swag bags, but what they did have was an interactive booth where attendees could try on jewelry. The interactive aspect gave people something to do beyond just standing there while a company pitched their products. 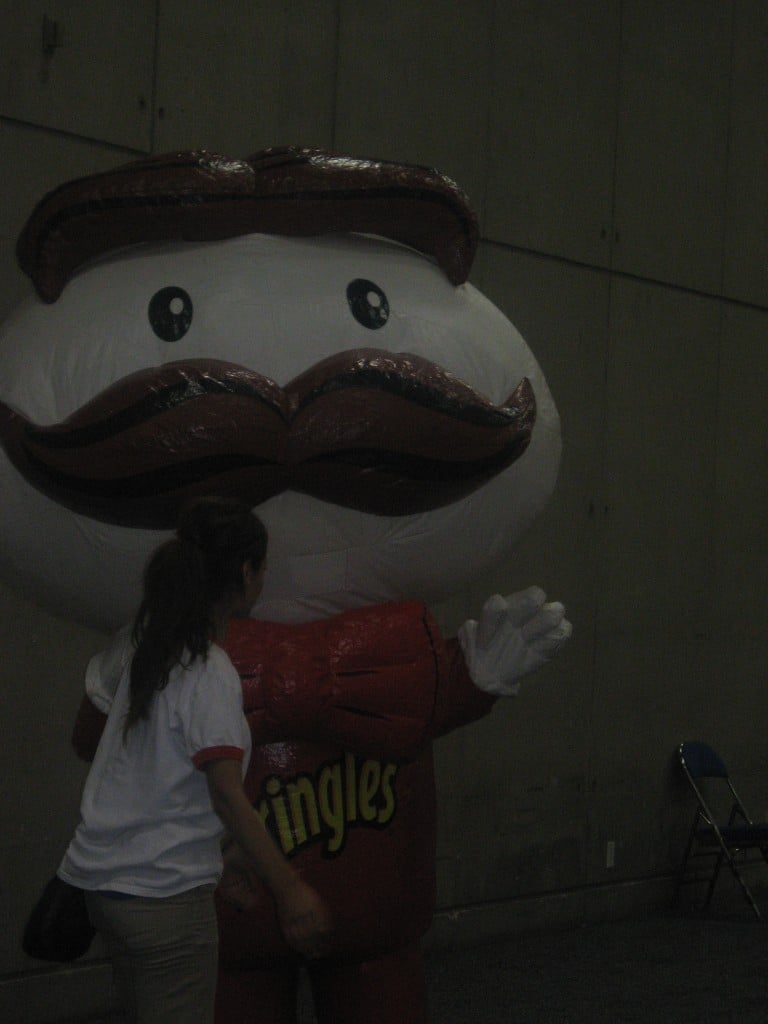 Who doesn’t love (and notice) a giant blow-up Pringle man? Yes, there really was someone in that costume, hence the out-of-costume girl also in the picture – she was leading him around since he really couldn’t see very well. Goofy stuff always attracts attendees to your booth. 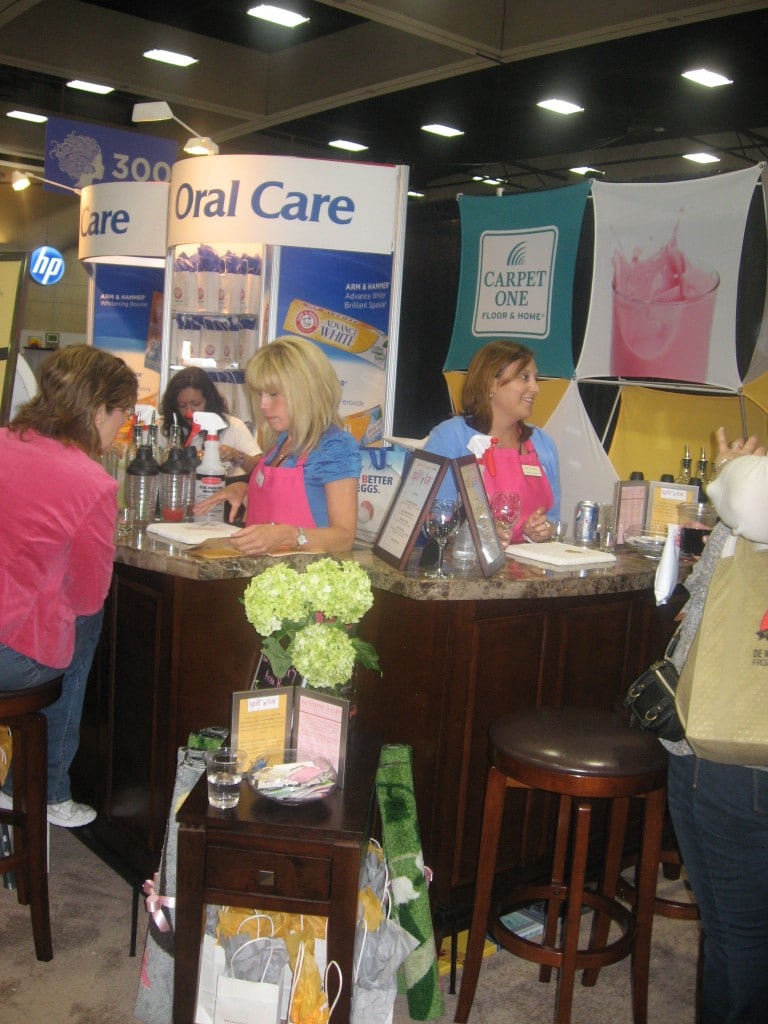 I had never heard of Carpet One before, but after visiting their Spill Bar at BlogHer, I won’t forget it. Their carpet is stain resistant, and when you sat down at the bar, they let you mix a cocktail and spill it on a sample of carpet to see how stain-proof it really is. Demoing your products is a great way to get people to not only visit your booth, but to actually remember you. 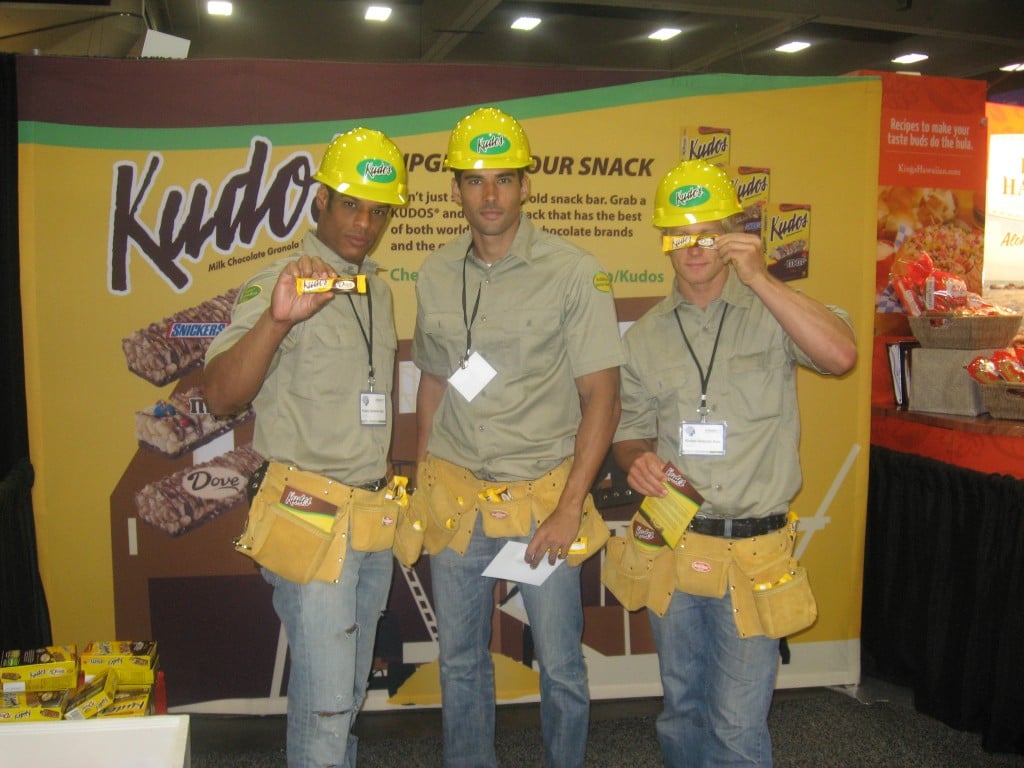 The lesson you can learn from the Kudos booth is this: hire great people to man your booth. Of course, three guys dressed up like construction workers is perfect for a female-centric conference, but beyond being super cute, the guys were really engaging and spoke about the product well. Plus, like the Pringles guy, the dressed up workers were goofy, so it attracted attendees. 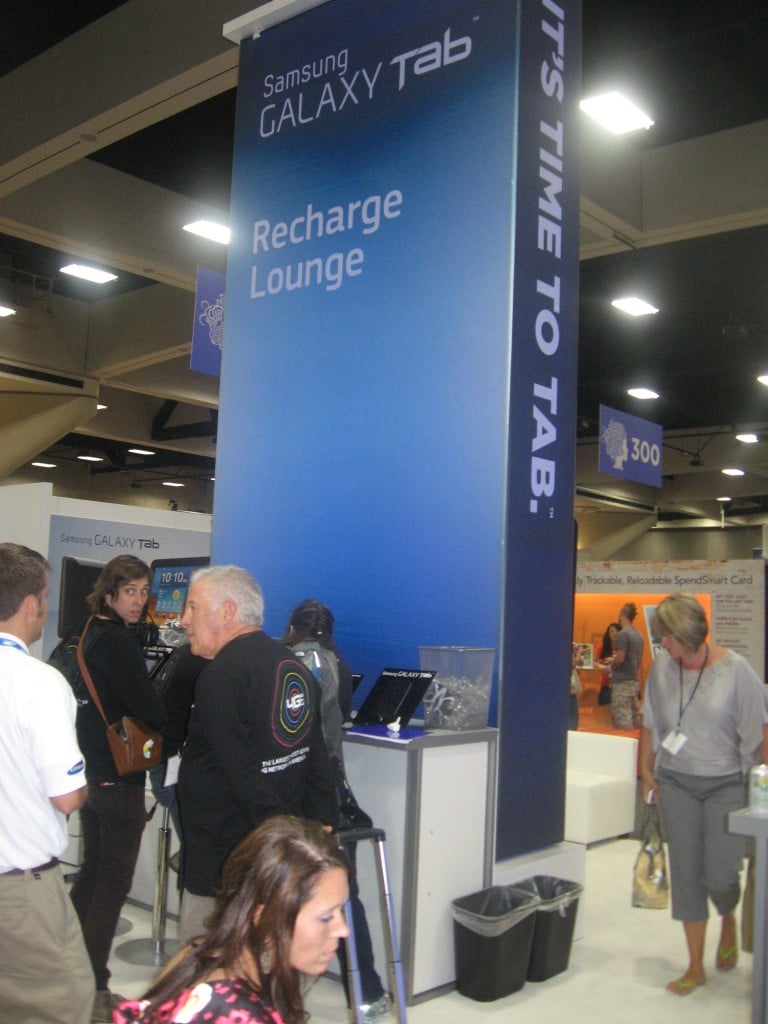 Samsung was smart and not only gave attendees the opportunity to check out their newest products, but they also hosted the recharging station. It was something a lot of the bloggers there really needed, and even those without laptops and phones to change took the opportunity to sit down on one of their couches for a few minutes. Be useful to attendees and they’ll appreciate what you’re providing (and it gives you the chance to talk about your company). 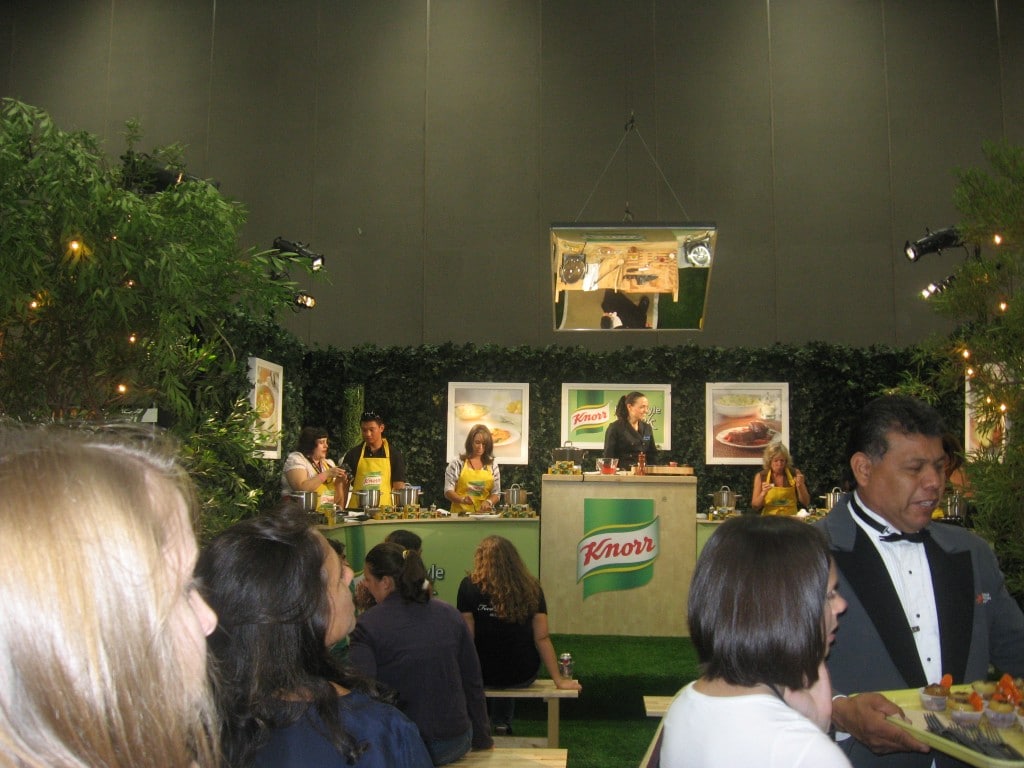 The Knorr booth was cool because they actually set up a stage and did cooking demonstrations where attendees were invited to participate. They had samples of their products available to taste as well as to take home, and the benches gave people a place to sit and watch the demos. Their booth was also very visually appealing.

So what is the take-away message? If you’re exhibiting at BlogWorld Expo or any other conference, some things to keep in mind include:

Be creative with your booth ideas! Beyond buying your actual spot, you don’t have to spend tons of money on your exhibit – just think outside the box a little. Talk to the conference sales team – most are beyond happy to accommodate your ideas, no matter how creative. 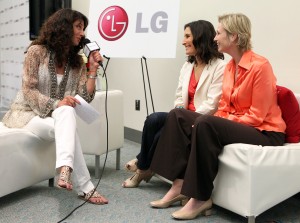