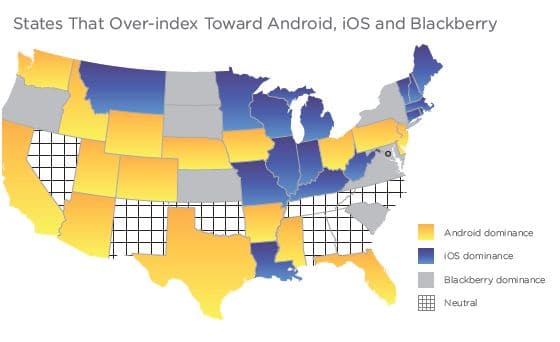 Do you think you live in an Android state or iPhone state? I was guessing Android for my state of Texas and I was right. Jumptap put out a report this morning with a map showing which mobile activity each state in the U.S. has more of.

As you can see from the map above, the Southern and Western states (Texas, Florida, California) are over-index towards Android, while the Midwest and New England states are Apple dominated. (And as this TechCrunch writer pointed out, New York is embarrassingly Blackberry dominated. Why is that?)

Last month, a report was released which showed the Android operating system had the largest share with 39%, followed by Apple with 28%. There are obviously more Android phones out there, but how well are the mobile ads performing? This graph shows that Apple products like the iPod, iPad and iPhone do better with click-through rates.

Despite who is doing better, overall these click through rates are poor. “Forget Android versus Apple for a moment. What that data says is that mobile ads are failing across the board.”

So tell us – do you live in an Android or Apple state…or Blackberry? 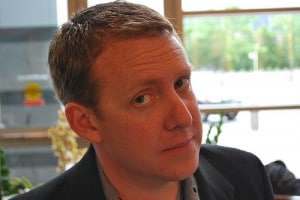