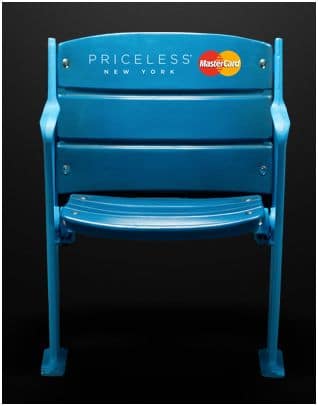 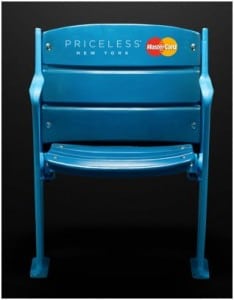 If you live in New York, you have the chance to see some of the 20 seats from the original Yankee Stadium that will be scattered around the city. These seats are part of MasterCard’s new “Priceless ” campaign through Facebook Places.

The original Yankee stadium was demolished in 2010, but a few of the seats survived.

When you find a seat, scan the QR code with your smartphone and you will be checked into Facebook Places. Once you check in, you’ll be eligible to win VIP tickets to a 2011 Yankee game.

The seats have different names such as Doubleheader and Triple Play and will be placed at places like Katz’s Deli and the New York Stock Exchange.

Towards the middle of July, MasterCard announced their Priceless New York program, which is meant to “help drive preference and affection for the MasterCard brand among cardholders by offering them an opportunity to enjoy the things they are most passionate about, whether its travel, sports, shopping, culinary or arts and entertainment.”

New York is the first city to be spotlighted for the program.

So New Yorkers, have you seen any of these seats yet?