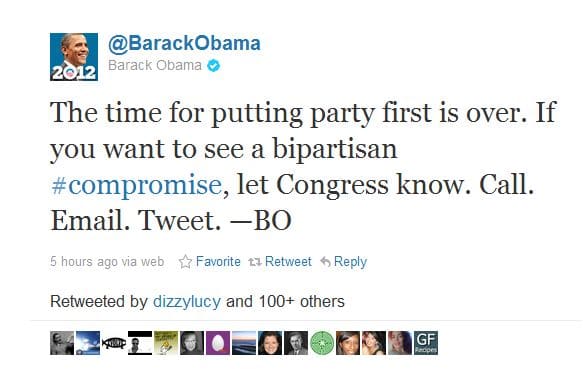 The negotiations over raising the U.S. debt ceiling continue, as I am sure you are all well aware of. President Barack Obama and his staff are utilizing the power of Twitter to get a clear message out – we need #Compromise.

Earlier in the day, the President tweeted on his official Twitter page “The time for putting party first is over. If you want to see a bipartisan #compromise, let Congress know. Call. Email. Tweet. —BO”

The next tweet said, “You heard the President. So here’s what we’re doing: throughout the day we’ll post the Twitter handles of GOP lawmakers in each state.”

So now his staff is posting Twitter handles of GOP lawmakers in each state, giving Twitter users the opportunity to voice their opinions. Let’s pray Twitter doesn’t blow up, shall we? When the President asked citizens last week to contact their representatives, the capitol’s websites went down.