Earlier this week, Chris Brogan announced that he’d be offering a 2-hour webinar for $47. The topic of choice? Google+. Now, it’s inarguable that Chris has been spending a ton of time on Google+, but some are calling foul, given that the platform is so new.

So the question I hope to answer today is this: Is Chris Brogan a Google+ expert or is he just stealing your money? 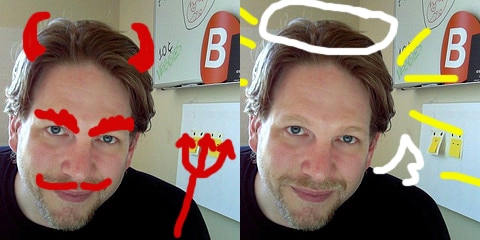 Before I start, I’d like to note that since this is such a strong opinion piece, my opinions might not be the opinions of everyone at BlogWorld. Furthermore, if you wrote about this debate on your own blog, just because I don’t agree with you doesn’t mean I think you’re stupid or that your opinion is invalid. It’s a little sad to me that I have to even type this paragraph, but there’s some venom in the blogging community about this topic. Also, I’m not trying to “call anyone out” here – I just don’t like when bloggers are obviously writing about someone but refuse to link to them or use their name. It feels a little like talking about someone behind their back.

First, to catch you up to speed, I want to invite you to check out the landing page for Chris’ webinar. In case he takes it down after the webinar happens, the video he posted is on YouTube here. Are we all caught up now? Good. There are two things in particular that I want to talk about now: being an expert and knowing your audience.

Is Chris A Google+ Expert? Is Anyone?

Back in January, I wrote a post about how you shouldn’t call yourself a social media expert, especially if your claims are unfounded. My argument is that although you might have a lot to teach about social media, this is an industry that is so new and changing so quickly that no one person can truly be an expert yet.

Do I think this argument applies to the situation? Yes and no. I wholeheartedly agree with bloggers who claim that Chris is not a Google+ expert because, frankly, I don’t think that anyone can claim to be a Google+ expert. Over on Spin Sucks, Gini Dietrich actually wrote a post called “Beware the Google+ Experts” about the situation, which I was excited to read because the title aligns with my feelings perfectly. Google+ is way too new for “experts.”

Only…well…Chris isn’t actually calling himself an expert. That’s where I think the whole “Chris Brogan isn’t an expert so you shouldn’t pay him” argument falls a little flat (and to be clear, Gini isn’t by far the only one making this argument).

In my opinion, there’s a difference between being an expert and charging someone money for something. For example, in my work as a writer, if a client wants me to write articles that use keywords, I charge extra. I’m not an SEO expert at all – I just know how to insert keywords into an article. I don’t bill myself as an expert and neither does Chris. In fact, in one of his blog posts about this debate, he writes,

I’ve seen dozens of comments and posts and blogs saying “How someone can claim to be an expert after 250 hours is laughable.” What’s laughable is that I’m not saying I’m an expert. I’m saying that I’ve used the service a lot and I’ve got some ideas that I think are worth your time and some money.

So, no…I don’t think Chris Brogan is an expert. I think he’s a guy who has had some success on Google+ and is offering to teach you what he’s learned so far – and that’s all he’s claiming to be. He’s being very transparent about his relationship with Google+ so potential buyers can make up their own minds about signing up (or not). You don’t have to buy things only from experts.

The Blogging Bubble: Know Thy Audience

Chris’ webinar is being offered through Human Business Works, which he writes is “an online education and community company for small businesses and solo entrepreneurs.” As a blogger or social media professional, you are definitely a solo entrepreneur (if you want to be, at least)…but so is my dad, who runs a part-time business as a metal fabricator or my aunt, who has her own beauty salon. Sometimes, we’re caught in this blogging bubble where we forget that there are people out there who barely know what social media is, let alone how to use it. They’re part of Chris’ audience, just like you and me.

Let’s face it – most of us here, the BlogWorld audience, has been exploring Google+ because we’re interested in that kind of thing. This is our industry. It’s what we do. But Google+ is for everyone, and not all of my friends fall into my blogging/social media circle. If I invite my dad to join, he would have no idea what is going on and although he is a smart man, he’s just not interested enough to take the time to learn. Chris’ seminar would make perfect sense for him.

In other words, you are probably not Chris’ target market for this product. Allen Stern recently wrote a post where he voices his opinion that Chris is taking advantage of his fan base – but I think maybe he misses the fact that Chris’ fanbase isn’t just made up of bloggers.

It’s kind of like the Dummies books. Let’s say I decide to pick up the one about blogging. It would be a total waste of money…for me. I’ve spent 5+ years learning that stuff myself. But let’s say my dad decides to pick it up because he wants to start a blog. It would be perfect for him, saving him lots of time. Yes, he could learn everything covered in that book for free, but it would take him a long time. Someone buying a Dummies book isn’t paying for information that can’t be found anywhere else. They’re paying for convenience, because it is a shortcut to learning something specific. Chris’ webinar is for people who don’t want to spend 250 hours figuring out Google+ for themselves because, unlike those of us interested in social media, it’s not their primary area of focus.

Basically, you’re only taking advantage of people if you’re not delivering on your promises. And I obviously haven’t been to Chris’ webinar since it hasn’t happened yet (and I probably won’t go because I’m not the target market), but I’ve followed him for years and got the chance to meet him in New York through my work with BlogWorld. My professional opinion of him is that he’s a trustworthy guy. I don’t think he’s going to bait-and-switch ya with this webinar.

That’s not to say that you should be out there recommending this webinar to your readers. Who is your audience? For example, Kirsten Wright wrote a post called “Why You Shouldn’t be Paying to Learn How to Use Google+…Yet,” and for her audience (which I suspect is similar to the readers here at BlogWorld) I think it’s good advice. But again, her audience isn’t necessarily Chris’ audience – at least, not his whole audience. I don’t agree with the idea that he’s wrong to offer this webinar.

So, no…I don’t think Chris Brogan is stealing your money. I think he has a product for sale and you can choose whether or not that product is right for you. As Chris Pirillo puts it,

I’m largely in the camp of “Let Chris Do What Chris Wants to Do” – which intersects with the “Do What You Want to Do but Don’t Piss in Someone’s Cheerios” camp. I’m not here to claim that what Chris has to share is anything more than Chris’s insights on Google’s new social network, but… hey, how much is two hours of your time worth?

For someone who is interested in learning Chris’ opinions on how to best use Google+, two hours might be worth $47 to you. If it’s not, that’s okay, but it doesn’t mean that Chris is wrong for offering it. After all, we’re all adults here. I have a problem with “experts” presenting products that make outlandish promises to feed on people’s fears, but when the scope of a product is made clear, as I feel is the case with this webinar, I don’t have a problem with someone selling it…and I don’t understand why anyone would. After all, people pay for a lot of weird things. Haven’t you ever purchased anything that others think is worthless but that was important to you?

The bottom line is that the title of this post is a little misleading because I don’t think either option applies to Chris. He’s not a Google+ expert and he’s also not stealing your money. He’s offering a webinar, and you have the option to buy or walk away. You also have the option to promote it or to tell your readers that you think it’s a bad idea – but in both cases, try to understand the product before posting what amounts to a review of someone’s idea. Just like it’s unfair to your readers to promote something that is low-quality or not right for your audience, I feel like it is also unfair to your readers to recommend against something that could be helpful for some people.

I hope you’ll leave a comment, whether or not you agree with me. All comments are welcome as long as they’re respectful! Also, when I mentioned this post on Twitter a lot of people showed interest in reading something where I disagreed with the mainstream opinion out there. If you enjoy that kind of thing, this is my shameless plug for Blog Zombies, a project I’ve been working on for over a year now that’s being released this fall, where I’m going to be voicing opinions that heavily go against the status quo. I hope you’ll check it out if you think you might be interested.