I’m an unashamed fan of Internet memes. I remember the first time I saw the Dancing Baby – we didn’t have the Internet at my house yet, but we had computer class at school, and someone pulled it up when we were supposed to be practicing our typing skills and the teacher stepped out of the room for a moment. We all got in trouble when she got back, but it was totally worth it.

Below are some of my favorite memes of all time. You’re welcome in advance. Okay, okay, to make it a little more relevant, let’s also look at why they’re successful and how you can apply these characteristics to your own blog posts.

True story – as I’m writing this post, Nyan Cat is playing in the background. You can see it on YouTube, and there’s a whole site that tracks how long you’ve been nyaning. It’s absurd. It’s a cat with a pop tart for body who’s flying through space, leaving a rainbow in its wake and meow-singing (or rather nyan-singing) a song on loop.

Why is it so addicting? Why am I still nyaning after (let me check) 198 seconds? Because it makes me smile! I’m as guilty as any of writing posts that are somewhat negative, and they always bring in the hits, but people like silly, uplifting posts too. Life already throws a lot of bs at us. Sometimes, you just need your day brightened, and the blogger who can do that is a blogger you’ll return to read again.

The Numa Numa guy, whose real name is Gary Brolsma, wrote on his website, “I’ve always have been a fan of making little video clips to entertain friends, by making mini-documentaries on stupid things, or just plain old goofing around.  Honestly, the original video was exactly that.  I’m just a regular guy that sits in front of his computer bored out of his mind messing around on the internet looking at funny videos and other websites to pass the time.”

In other words, he wasn’t worried about hits or making money or going viral or anything like that. He was just being himself and was brave enough to put it up there for the world to see. Sometimes, as bloggers, we get a little wrapped up in the numbers and what we think will be popular. Take a deep breath and just be yourself instead.

#3 – Winning: Relate to your readers. 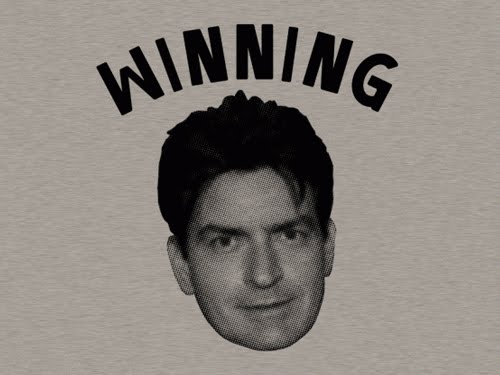 One of the more recent memes to hit the ‘net is Charlie Sheen’s catchphrase “Winning!” with runner-up mentions going to mentions of having tiger’s blood and adonis DNA. Love him or hate him, you have to admit that this kind of overly-confident banter is kind of addicting – we’ve all had the urge to say it at some point. The question is this: Why?

I think why so many people (including me) jumped in the “I love Charlie Sheen bandwagon is because we related to the situation and wanted to emulate it. I’m not saying that he was right, but here was a guy who felt like “the man” was keeping him down, and he was actually standing up for himself. We’ve all felt like that, that we wanted to start a revolution because we see a perceived wrong-doing. In the same way, you want to connect to your readers. You don’t have to relate to them in the same way (i.e., it doesn’t have to be about wanting to get back at people who’ve wronged you), but you want to relate to them in some way. Be on the same team. Write posts that make your readers want to stand up and say, “Yeah! Me too!”

Okay, I’ll admit it. I’ve been Rickrolled. Multiple times. If you don’t know what rickrolling is, check out this link to learn more.

See what I did there?

When someone rickrolls you, you instantly want to share it with other people. You can laugh at yourself, but it’s even more funny when you turn it around and “get” someone else the same way someone got you. It’s extremely sharable, in part because they want to be the first person to share it. If you share something with someone and they’ve already seen it, it isn’t as gratifying. You want your posts to be the same way. When someone reads it, you want them to instantly want to share it with others.

Think about what makes a post sharable when you write something: the message was clear, there’s humor involved, the idea is super smart, the post was short or very skimmable (like a list), etc. Use these characteristics when you write posts.

The Trololo guy is being called the new rickroll. The video is just…weird. Seriously. Look at it. WEIRD.

Part of the reason it went viral is just that – it’s really strange. Think about that as you’re writing posts. You don’t have to be super odd, but think about how you can be a pattern interrupt in someone’s day. It will keep them interested in your blog and make them more willing to share with people they know.

#6 – Lolcats: Give readers something they can make their own. 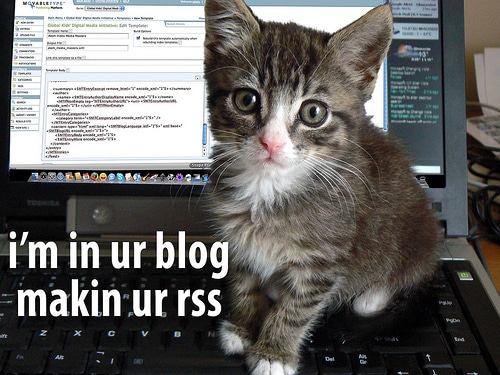 Lolcats might be the most widespread meme on the Internet. Unlike many of the others on this list, this isn’t a single image or video or phrase – it’s an idea. One of the reasons it is so successful is that not only can people enjoy the lolcats images already in existance, but they can become part of the meme by making their own. They become part of the lolcats community.

As you write blog posts, think about ways you can allow your readers to make your content their own. Encourage comments, invite readers to take your advice and then come back to share their experiences, and otherwise add to the conversation. You can also feature their tweets, comments, and emails as part of your posts, and remember – whenever you link to someone else, they’ll be more interested in what you write, since they have a small part in the content you’ve created.

#7 – Philosoraptor: Be funny, but have a point. 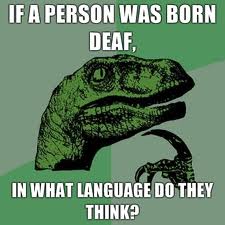 Philosoraptor is one of my favorite memes. It’s less popular than some of the others on this list, but still extremely addicting. Basically, it’s a velociraptor image (the same one every time, with the same background), that always has something philosophical and say. Often, philosoraptor is funny, but still makes you go, “huh.”

There’s a lot of funny stuff on the Internet. A lot of funny stuff. Being funny isn’t enough to get shared anymore. If you have a point, too, though, you’re a double threat. Don’t lose the meaning of your post in trying to be funny.

The point I’d like to make about Baby Cha Cha is that it isn’t anything perfect – it was experimental files collected as a sample for a new 3D animation software product. Your blog posts don’t have to be perfect either. Too many bloggers get caught up in editing and re-editing, and while it is important do a good job, don’t get caught up in the details so much that you don’t hit the publish button.

I would classify End of Ze World more as a viral video than an Internet meme, but it still fits what I’m talking about here. If you haven’t watched the video, be aware that it is NSFW, so if you’re offended by strong language, you might want to skip it. The basic idea is this: a narrator is talking about the state of the world and the probability of countries using the nukes they have. The video is light-hearted, but it is also strong social/political commentary.

This point kind of goes along with point #7 – be funny, but have a point. I’d like to take that a step farther though, and say that you should not be afraid to speak your mind. Not everyone will agree with you, but those who do will spread your message. The best ideas always offend someone. Don’t be afraid of that someone.

The last meme I wanted to highlight is another that I’m sure you’ve seen, since it’s over ten  years old and has invaded nearly every facet of pop culture – Peanut Butter and Jelly Time, or PBJT. The thing this meme does right that you’ll find with other memes (like nyan cat on this list, hamster dance, badger badger badger) is repetition. As annoyed as we might be by things on loop, human beings are psychologically attracted to repetition. Child learn when lessons are repeated, for example. So, as annoying as PBJT might be, the repetition (and goofiness) is part of what makes it so popular.

Don’t be afraid to repeat your message on your own blog. You don’t want to pound ideas into your readers’ heads to the point where they’re sick of reading your posts, but finding new ways to repeat the same lessons will help your blog readers become your disciples.

What are your favorite Internet memes? What lessons do they have for bloggers?