Yesterday afternoon, President Obama sat down on Twitter for the first ever Twitter Town Hall event, where fans and critics alike could ask questions in an open format. 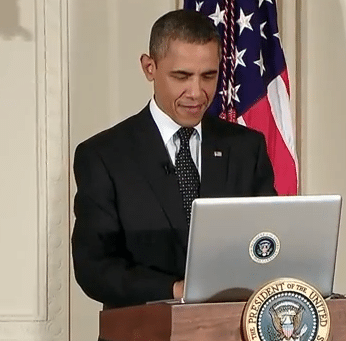 The questions were asked in the days prior, sent to the #AskObama hashtag. From there, Twitter search algorithms identified the most engaged-with Tweets, and those questions were then given to the President.

Obama threw out the first tweet to start the event, addressing the budget:

“in order to reduce the deficit,what costs would you cut and what investments would you keep – bo,”

After that, he answered questions orally and staff members tweeted summaries of the responses to the @townhall account.

Because of the duration of the event, and the length with which President Obama took to answer the questions, he was only able to answer 18 of them … a small fraction of the several thousands submitted. He pointed out that brevity is not his strong suit. “I know, Twitter, I’m supposed to be short,” he said. In fact, The Associated Press calculated that if the president tried to tweet his first answer, it would have been 2,300 characters long!

But, really, can you blame him? A 140 character answer to some of the country’s most pressing answers just wouldn’t have cut it.

What Questions Were Asked?

According to Mashable, the Twitter Town Hall received 169,395 questions and Twitter reported the questions could be categorized according to the following areas:

And, according to TwitSprout’s #AskObama Twitter Dashboard, the most retweeted question asked was: “Would you consider legalizing marijuana to increase revenue and save tax dollars by freeing up crowded prisons, court rooms.”

Most people say, from a social media perspective, the event was a success. The president picked up nearly 30,000 new followers at his campaign account, @barackobama, putting him above 9 million followers. Not to mention the networks that aired the event live, and Obama getting in front of youth and the social media savvy crowd.