It’s June 26th as I write this, and last night I recorded an episode of Be a Better Podcaster, my series about podcasting. It was a good episode. I fielded a question about gathering listener statistics and talked about simultaneously broadcasting the show on Ustream. It was about 20 minutes long and an episode that I considered a success. 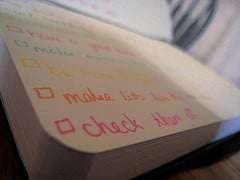 Why, you ask? Well, here’s the thing. I was broadcasting to Ustream for only the second time ever. The first time, which you can hear in a recent episode of Yet Another Weight Loss Show, was successful. With only a minor glitch, easily ironed out, I figured I was all set for doing the next show. I thought for sure that the Ustream bit was in the bag. It wasn’t.

I had planned on doing the show earlier in the evening last night, but I kept putting it off because I got busy doing other things—mostly revolving around getting my webcam to work in widescreen like it’s supposed to—and it was 2am before I started the broadcast. Strike one. I was tired.

I had planned on scripting the show beforehand. Now, I never fully script anything, but I like to have an outline of bullet points ready. I didn’t. Strike two.

I did push the Broadcast button, I did do the show, and I did think it was a good one… until I listened to the playback later. In this show, I use a music bed—a series of songs that play quietly under my voice. There are benefits to this that I’ll cover in a future article, but the important thing here is that the music bed was playing just fine through my headphones and was recorded to the podcast just fine.

Sounds like it’s not a big deal, right? Tons of shows don’t use a music bed—most of mine don’t. Unfortunately, I mentioned it a few times in the show. During more than a couple of segments, I sounded like a raving lunatic who was hearing strange music in his head, and while I won’t say that’s never happened (thanks, J?§germeister!) I can say that it wasn’t happening last night.

I think there are two takeaways from this. First, of course, I needed to plan better. I’ll remember this experience and plan things out better in the future. The second takeaway is the lesson that sometimes you do things that just don’t work out and you have to live with it. I have three episodes between my various shows that have had to be completely scrapped; this is just the latest example. The first time it happened, I was devastated. The second time, annoyed. This time? Still annoyed, but I’ve accepted that this is going to happen every now and then. Hopefully it’ll be extremely rare. But I’ll always have the lost episodes to look back on and lament.