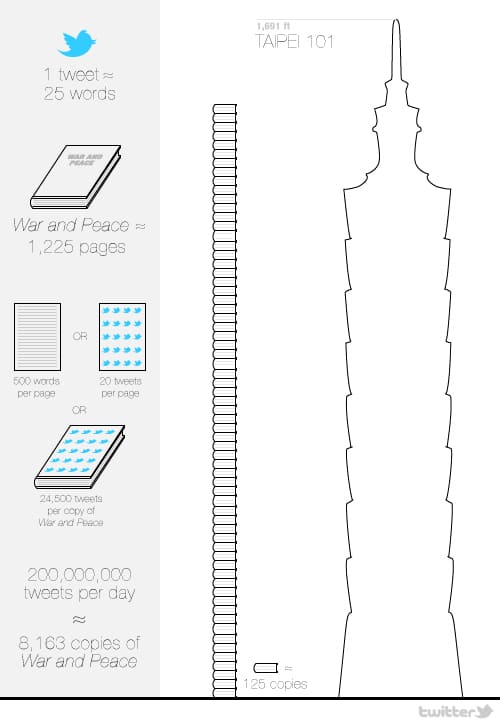 Twitter made an announcement today (June 30th) on its official blog that it has now reached 200 million tweets a day. It was just two and a half years ago that they reached 2 million tweets and a year ago they reached the 65 million mark. As you can see, this growth is nothing short of phenomenal!

Twitter put together an info graphic to give us some perspective on this milestone they’ve reached.

For perspective, every day, the world writes the equivalent of a 10 million-page book in Tweets or 8,163 copies of Leo Tolstoy’s War and Peace. Reading this much text would take more than 31 years and stacking this many copies of War and Peace would reach the height of about 1,470 feet, nearly the ground-to-roof height of Taiwan’s Taipei 101, the second tallest building in the world.

It’s hard for a person to wrap their brain around this and the fact that a billion tweets are sent every 5 days. Amazing. Just amazing.

They also gave us some insights into what the world has been tweeting about for the first half of 2011. It’s no surprise that trending topics such as Charlie Sheen and #tigerblood were among the pop culture list and William and Kate were among the News/Events most trending.

How many of those 200 million tweets a day do you send? I definitely add my fair share.