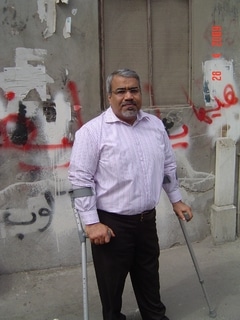 21 activists went before a military court yesterday (June 22nd) for being accused of belonging to terrorist organizations and trying to overthrow the government. Reporters Without Borders was shocked at the long sentences given out. Eight received life sentences, including one Bahraini blogger – Dr. Abduljalil Al-Singace.

Another blogger was sentenced to 15 years, while thirteen others received 2 to 15 years.

“The only crime committed by Abdulemam and Al-Singace was freely expressing opinions contrary to those of the government,” Reporters Without Borders said. “These sentences, handed down at the end of trail that flouted defence rights, are typical of the intransigence that the authorities have been showing towards those identified as government opponents, who have borne the full brunt of their repression. The international community must call the government to account on its strategy of stifling all dissent.”

Al-Singace was arrested last August when he returned to Bahrain from being abroad. He is head of the civil society movement El Haq.

What do you think of the sentences handed down?