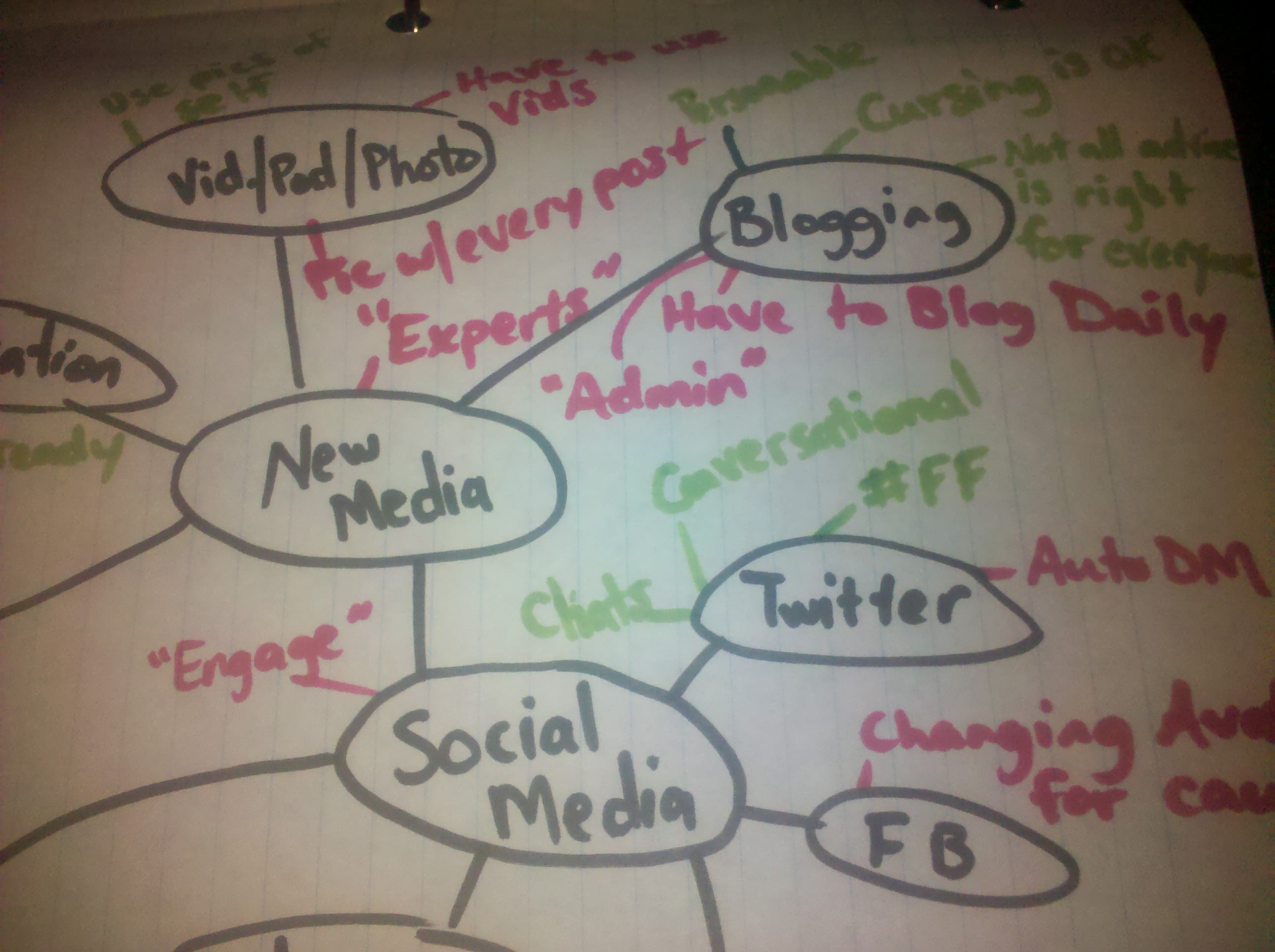 In today’s new media world, strategies are changing really, really quickly. Good advice today might not be good advice tomorrow, and no advice applies to every blogger you meet, no matter how experienced you might be. Something that I like to do every six months or so is map out my new media beliefs. Doing it really helps me become a better blogger.

You may have heard about mind mapping before, which is a kind of brainstorming technique where you let ideas flow in a really visual way. The way I map out my new media beliefs is similar, but really you can use whatever technique you want. Let me give you the steps that I use and you can modify it for your own needs from there.

Step One: Gather Your Supplies

I like to do things old school style, with a piece of paper and some colored markers. Choose at least three colors – one basic color (like black) and two other colors that are pretty different. I also use a pencil. If you want, you can use mind mapping software, which is available online. Some people like to use whiteboards, but I like to keep a more permanent version. 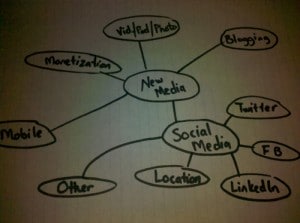 What are the new media topics that are relevant to you? For most of us, this list will include things like blogging, social media, video/podcasting/photography, mobile, and monetization, but these aren’t always relevant to everyone (for example, if you’re a podcaster, you might not do any traditional blogging. You might also want to break down some of these topics more – for example, for my needs, I break down social media into Twitter, Facebook, LinkedIn, Location-Based, and Other.

Step Three: Fill In Some Positives – What Do You Believe?

Choose one of the colored markers and make it your “positive” color. Look at each base topic and think about the advice people give, popular theories, etc. If you agree with them, write them down. For example, I believe blog posts should be personable and I believe that Twitter should be conversational. If you aren’t sure if you believe in something or not, write it in pencil.You can even ad tweets or quotes from other people that really connected with you.

Step Four: Fill In Some Negatives – How Do You Disagree?

It doesn't have to be pretty.

Now it’s time to do the same thing for each topic, but instead write down some things you don’t believe. These negatives can be popular belief or they can be controversial. For example, I don’t believe in the use of auto-DMs, which is a pretty common belief. I also believe that changing your Facebook profile picture for cause promotion means nothing, which is something that not everyone believes. Don’t be afraid to be super honest and write down things even if they are the unpopular opinion. Again, if you aren’t sure, write it in pencil.

When you’re done, take a look at your paper (or computer screen or whiteboard or whatever) and ask yourself if you’re just talking the talk or if you’re really walking the walk. Sometimes, I like to star the most important points and write about them or even start developing product ideas about them. If you don’t blog about blogging, that’s okay. You can still tweet out some of your beliefs, post them on Facebook, leave comment on other blogs, or just apply your belief how they make sense in your niche.

You could even modify this to map out your niche-specific beliefs. For example, at my After Graduation blog, I write about career, so I could do this same technique, but instead of new media as the center bubble and blogging, Facebook, Twitter, etc. as outlying bubbles, I could make career the center and have outlying bubbles with topics like job hunting, motivation, and entrepreneurship.

Over time, your belief map can – and actually should – change. You can take some of the things you wrote in pencil and add them to one side or the other, or you can even start from scratch, redoing your mind map as your opinions change.

We’re bombarded with opinions from every direction in this new media world. Sometimes, it is simply helpful to take a moment to figure out what you believe, not what others say you should believe.