Online users spend 16% of their time on social media, up from only 8% four years ago, says a new report by comScore. In 2007, social networking represented about 1 out of every 12 minutes spent online, while today that number is more like 1 out of every 6 minutes. This number doesn’t surprise me. I just wonder how long it will take until it’s 1 out of every 3 minutes. 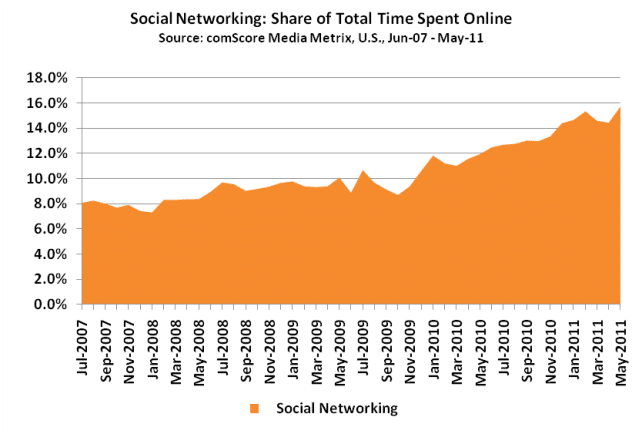 The other big finding in the study is the changing face of social media. Myspace was the social networking leader up until mid-2009, when Facebook finally pulled ahead and continued it’s upward growth. Today it is the 4th largest web property in the U.S. with 157.2 million visitors in May. Perhaps even more impressive, Facebook’s average U.S. visitor usage has grown from 4.6 hours to 6.3 hours per month over the past year! Quite the opposite, the amount of Myspace visitors has declined by about 50% in the past year.

Other sites in the running for the share of social media space are Linkedin, Twitter, and Tumblr, each showing record highs in May. LinkedIn had 33.4 million U.S. visitors, Twitter more than 27 million and Tumblr came in at 10.7 million. With this growth and the mass of people joining these sites at a record pace, who knows what the next few years will look like!

How People Are Traveling This Holiday Season, Winter Travel Infographic