Yes that is a generalization, but I would argue it is generally true. Presidential advisors Karen Hughes and Mark Penn demonstrated it in their keynote talk at BlogWorld last year. Congressman Weiner is learning about the true meaning of transparency right now. Former GOP Congressman Chris Lee learned that photos on Craigslist are not private. The latest evidence is this interview with leading Democrat Congressman Barney Frank in the Atlantic. 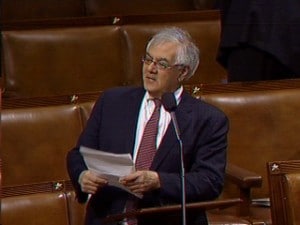 In the interview Congressman Frank says he likes to read The Economist, The New York Times, The Hill, Roll Call and Politico as well as books on British history. Then he says this:

I don’t get news on my phone. I don’t use Facebook or Twitter. I want substance. I’m not betting on stocks. I don’t deal in emergencies and I don’t know CPR. There’s enough possibility of misunderstanding as it is without 140 character tweets. Of course, when you’re talking about somebody getting shot, tweets have been good. But generally, I want more than you can get on a phone.

Apparently Congressman Frank is unaware that he can read all of his favorite newspapers, magazines and books on his phone or that he is missing quite a bit of “substance” by limiting himself to outdated forms of media distribution.

Then he says this:

The trouble with new media is the fact that there’s no screen. Anyone can publish anything. We still have the notion that if it’s printed it has some validity.  Previously, you had to convince at least one other person that it was worth printing. Now, anyone can print anything in this medium. In general, there’s a lot more gossip and fragmentation.

Apparently Congressman Frank has never heard of The National Enquirer, The Sun and scores of other gossip oriented newspapers, magazines, TV shows etc. I assume he has forgotten about Pulitzer Prize winning journalist Jack Anderson; whose political gossip segment was a feature on Good Morning America for nine years.

New Media has given us the most free, open and democratic media in all of human history. That is in direct keeping with American ideals. Our political leaders should be doing everything they can to educate themselves about it, embracing it and advocating for it.

***Update 6.6.11*** Weinergate is getting bigger. And with BlogWorld NYC keynote speaker Andrew Breitbart’ latest post you have to ask is the Blogosphere about to notch another politician resignation in its belt?