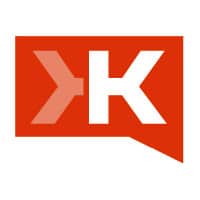 The more I learn about Klout, the more I like it as an influence measuring tool. Here are BlogWorld, Klout is something I’ve talked about in the past, and we even devoted a week of Brilliant Bloggers to Klout. Since then, Klout has made some changes in both their interface and their algorithm, both of which I thin has made the service even better. Plus, I love the new Klout badges you can earn. Today’s introduction of the +K button takes the cake, though, at least in my opinion.

I first read about the +K button on Mashale, and headed over to Klout’s site to check it out for myself. It’s an interesting concept, and they thought out the functionality well. Here’s how it works:

There are some things I like about this right off the bat. First, I think it will help Klout’s algorithm choose your topics better. My list includes things that I definitely do tweet about, like writing and social media, but other topics on my list right now include hacking and Samsung. Ermm…what? Not sure I’ve tweeted about either of those topcis ever in my life. Luckily, Klout gives you the ability to opt out of any topic they’ve chosen for you that you think is a bad fit, so I was able to hide hacking, for example, from public view. I don’t want people to think I’m a hacker.

One of the downfalls that commenters on other sites have already noticed is that this definitely makes Klout more of a popularity contest. You can campaign to get people to give you their +Ks for the day in specific topics, making your Klout rise artificially.

I like that you’re limited to giving people a +K in a certain topic only once a week. I also like how Klout comes up with the topics, since that means the topics you see really should be topics that the person talks about. If you could give a person Klout in whatever topic you wanted, people would definitely try to scam the system to rank high for certain topics.I’m not sure I’ll like it as much when you can submit your own topics.

Something that users have also already noted is that a +K from someone with a higher Klout number should mean more than a +K from someone with a lower number. I’m not sure I agree. I can see the logic, but I also think that if you’ve influenced someone, it shouldn’t matter who that person is. If I influence my mom to buy a purse and Paris Hilton to buy a purse, the overall affect is that they both buy purses. I should get the same amount of credit for that.In fact, even though my mom wouldn’t have as much Klout as Paris Hilton, it would probably be harder to influence her to buy a purse, since she doesn’t buy things for herself often. So, I like it that everyone is “worth” the same.

Overall, I’m excited to see the ways in which Klout is going to continue to improve. This move, to me, makes a lot of sense for their Klout perks program, since companies can now target people who have +Ks in a certain area, not just users who have an overall high Klout score. I don’t know if that’s something they’ll do, but it certainly makes sense to me!

I highly recommend that you check out Klout’s very own post about their +K update to learn more – and the commends on this post are extremely valuable. It looks like Klout employees are also jumping in there to answer questions, so it’s a good place to ask them.

What do you think of Klout in general and their new +K function?

(Hat tip to @jaybaer, who originally tweeted the post on Mashable where I first read about +Ks.)

Klout’s New Scoring Model Shows You Why Your Score Changed