In an effort to provide valuable information and to learn to make better videos, I am embarking on a series of posts that will unpack some concepts that I learned in college and need a bit of a refresher as I continue the daily journey of filmmaking. The first part of making better videos is an important reminder for all filmmakers, rookies to seasoned professionals: emulate your filmmaking heroes so that you can learn how to tell stories in new and exciting ways. 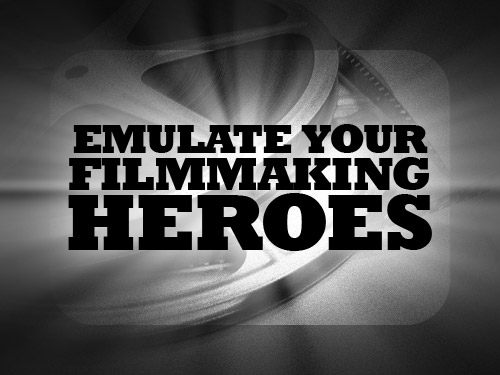 Emulate. A Dirty Word?
With an abundance of affordable technology in today’s modern digital world, anyone can make a movie. But like any artistic pursuit, each filmmaker strives for originality, to have their own voice and style that is devoid of influence. So, with this framing concept of originality, why is emulation so important to me?

First, to emulate simply means “to imitate in an effort to equal or surpass” (dictionary.com). It is the identification of a style or technique that you want to learn and then imitating what has worked in the past, building upon the accumulation of knowledge to do something of greater value.

Second, emulation helps you learn from the mistakes made by others, why they were mistakes, and how they can be used in different applications or contexts as solutions to new problems.

Finally, emulation goes back through the different periods of art, expressed magnificently during the Renaissance through the relationship of the apprentice and the master painter.

Apprentices started out doing menial tasks around a master painter’s shop, but would eventually start copying the drawings and paintings of the master. If considerable talent was shown, the master would promote the apprentice to work on background and minor details of original paintings, leaving the primary details and figures for himself. If the apprentice excelled at these details, then and only then, would the prospect of becoming a master painter and hiring apprentices be a reality. [1]

Identify Your Heroes and Their Style – How Do They Tell Stories?
As a lover of cinema, who are the master filmmakers that you aspire to be and are inspired by? Are you inspired by the timeless films of Steven Spielberg? The futuristic views of George Lucas and the Wachowski Brothers? How about the iconoclastic visions of Terry Gilliam or the comedic offerings of Kevin Smith? There are a million directors out there and identifying your heroes, why they are your heroes, and what you want to emulate is the first place to start.

From there, start looking at the different aspects of filmmaking and how your heroes use them to tell stories. Does a director favor one type of hero/villian relationship? Is the choice of dialogue wordy or sparse? Are there certain camera angles and shot compositions that are a trademark of the director? How is depth of field used to isolate or bring attention to details? How does the lighting change the tone of a particular scene? How is sound and music used in the context of storytelling? Is there music in every scene like Star Wars or is there room for the dialogue to speak for itself? How does the pacing and editing of a scene fit into the movie as a whole?

Using these questions as a starting point of analysis, start studying the work of other directors. Don’t just stop at gaining head knowledge of how a director works, take the time to grab your camera and try out different techniques. By emulating your filmmaking heroes, you will not only gain a deeper understanding of the filmmaking process, but in time you will make better videos, and shape your original voice.

A Shining Example of Emulation
I want to end with a story that has stuck with me for almost ten years. A friend of mine was mentoring a middle school student who had expressed interest in becoming a filmmaker. His desire and ambition led the young student to recreate scenes from Star Wars IV: A New Hope entirely with LEGOs.

Shot by shot, scene by scene, he used the same camera angles and composition, lighting, editing, music and sound effects. It was an impressive undertaking and to this day, I have no doubt that what he learned by recreating and emulating the vision of George Lucas has stuck with him through the years, especially as he continues pursuing a career in Hollywood.

With that, I encourage you to pick a scene from your favorite movie and do your very best at recreating it shot-by-shot. You might just be surprised at what you will learn about the art and craft of making better movies.