When people who are starting out in podcasting ask me for one piece of advice, I don’t talk about equipment or applications, technology or social network marketing. I go for something that’s even simpler than that. Something that can not only get them started down one fruitful path of podcasting, but one that will continue to reward them outside of podcasting – no matter if it is their hobby, passion or profession. 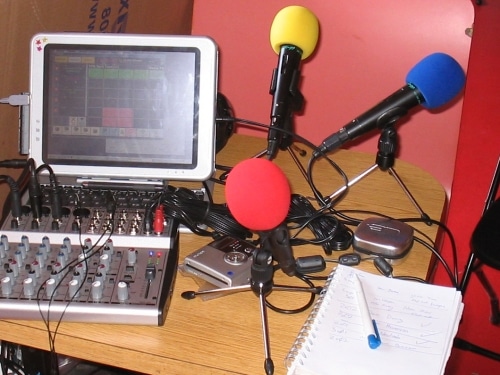 By that I don’t mean go and set up a Ustream channel, and have everyone listening at the same time around the world (although that is an optional benefit), but gather everything you need around you, from a script and guests, to musical cues, audio stings, sponsor messages and the occasional special effect… I keep a kazoo next to my microphone, for no other reason than sometimes it can be funny to throw it into the mix of a chat show.

I’ll be the first to admit that if you’re starting on your podcasting journey it will add to the workload, but these are the formative days that are going to shape your brain, so start doing it the most productive way.

Yes, productive. You will always have the safety net of a post recording edit, but it’s far quicker to simply catch a stumble than it is to re-assemble twenty different readings like some demented wave-form of a jigsaw. That means less time in post-production, less time while recording (a thirty minute show will take… thirty minutes), and while you’ll initially need to spend more time in prep, that investment will pay off.

And long term you’ll find more benefits. Starting off with a more natural sounding show, you’ll also start to multi-task better, talking and reading at the same time, but you’ll also gain one of the most important things possible.

Initially you’ll just feel this behind the microphone of your own show, but as you spend more time podcasting, you’ll find that this is one of those acquired skills you can apply to many areas in your life. The obvious one is public speaking – you’ll need less of your brain to actually do the talking part, while the part normally juggling sound levels, jingles and other areas an now be spent focusing on the audience, thinking about other areas of the presentation, and making sure that you enjoy the talk!

One of the other areas that I found an improvement in was when I was being interviewed by other people. It was easier to try and keep the interview on the subject that I wanted to stay on, to get over my ideas, and to be able to think about the bigger picture while answering small details.

Finally, and one that now seems obvious, if you move on to other media, especially radio or video podcasting, you’ll find it much easier to feel comfortable and come over more relaxed – which is good as these areas are a lot more unforgiving of errors than pre-recorded audio.

To sum it up, I think that “going live” has a bundle of benefits that will become clear over time. That’s why it’s my big piece of advice to anyone who asks.

How a Podcast Can Grow Your Brand

BlogWorld is Over, But Your Work is Not Yet Done.