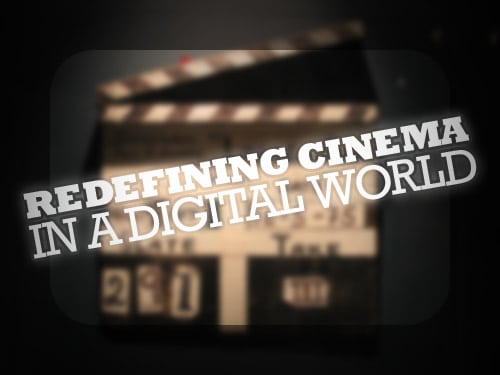 As an independent filmmaker, it is a great time for cinema thanks to the technological advances of the 21st century digital world. While there have been numerous advancements made in the equipment and software needed to technically make a film, the most impactful changes have occurred in how a film is funded, distributed and promoted. Let’s take a look at a few ways that the digital world is redefining cinema.

Kickstart Your Funding With A Proof Of Concept.
One of the hardest aspects of making a film, let alone any creative project, is raising the necessary funds for pre-production, production and post-production costs. If you don’t have the benefit of being backed by a major studio in Hollywood, you are either self-funding your project with credit cards and savings or borrowing money from friends and family.

Enter a new way of funding: Kickstarter (http://www.kickstarter.com). Kickstarter allows you to creatively raise money for your project by designating how much you want to raise and how you will reward and recognize financiers based on the amount they give. Additionally, you can add text, images or video that will help sell the viability of the project as well as your passion, dedication and motivation for creating the film. If you reach your goal in the set time, you receive the money and Kickstarter takes a small percentage to cover their costs. If not, the people that pledged money will not be charged and you can try again.

Recently I was talking with a friend who was the Director of Photography for a film project called Cardboard Dreams which was successfully funded through Kickstarter. He said that the secret of success was in the creation of a “proof of concept.” They filmed the first six pages of the script and the resulting footage was edited to show what the finished film would look like.

There are many examples of successfully funded projects on Kickstarter’s website and I would encourage you to take notes and get creative.

Where Can I See Or Buy Your Film?
It seems that as each year goes by, there are more and more online distribution channels for independent filmmakers. Video sharing sites like Vimeo (http://www.vimeo.com) and YouTube (http://www.youtube.com) provide great resources for people who want to broadcast trailers and short films in a wide-range of lengths and resolutions. But what if you want to sell your film and recoup investment costs? While you can go the traditional route of creating DVD and Blu-Ray copies, there is an intriguing option called Openfilm (http://www.openfilm.com).

At first glance, Openfilm looks and functions a lot like YouTube and Vimeo. But as you look into their different user types, some amazing functionality is added based on how much you are willing to spend. By spending $2.95 per month, you become a “Plus” user enabling you to accept donations from major credit cards through PayPal, guarantee TV placement through a partnership with TiVo, Boxee and HCC TV, and even sell mobile versions of your film. Upgrading to $9.95 per month makes you a “Pro” user and gives you added features such as selling digital copies of your film and even renting your film.

Openfilm appears to be a groundbreaking website for independent filmmakers who are looking to not only gain exposure, but to create a sustainable and profitable distribution channel.

Get The Word Out By Putting The “Social” In Social Media.
Social media is leveling the playing field when it comes to promoting independent film. There are so many different ways to get the word out ranging from Twitter to Facebook and everything in between, that it is almost impossible not to create an effective marketing campaign using these tools, as long as you follow a few simple rules:

As the Hollywood machine continues to crank out “safe” movies based on superheroes, award-winning novels and sequels, there is tremendous opportunity for original ideas to be funded, distributed and promoted through these new and innovative ways. All it takes is the vision, passion and action of a creative and self-motivated filmmakers to realize that the power is in their hands, should they ultimately want it.