When I first started blogging, I was out to make friends. I was extremely PC, to the point where I worried every time I said anything that might be taken as controversial. The problem? I didn’t particularly enjoy what I was doing and I wasn’t really building any kind of readership because every post was a watered down version of what I really wanted to say.

So, I started speaking my mind. Of course, in doing so, I found that a lot of people began to disagree with me and some people who did agree with me didn’t particularly like my writing style, so I lost some readers. But I also gained a lot of readers. I found fans of my writing style, just as I found people who didn’t enjoy it. And best of all, I started to enjoy my work. It was just more me.

Why am I telling you all this?

Because as much as I want to encourage you to take a similar route – to blog from your heart, even knowing that some people might disagree with your opinion or dislike your writing style – I also want to warn you of something that you may not realize will happen. When you dare to speak your mind online, people will be passive-aggressive toward you on their own blogs (as well as on forums, through social media, etc.). 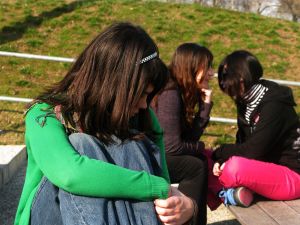 Oh yes, people will disagree with you. I hope that you welcome that and even encourage it – your posts are always stronger if people are willing to debate with you. What I’m talking about isn’t just friendly debate. No, I’m talking about bloggers who will post about how stupid your opinion is on their own blogs in very passive-aggressive ways. They may not name you, but when people in your niche read their posts, everyone knows exactly who they are talking about. You.

In a typical debate, it is encouraged to leave comments or even write another blog post in reply, but with passive-aggressive blog posts, it’s like we’re all suddenly back in high school and the cool kids are whispering behind your back or writing mean things on the bathroom walls. Attempting to defend yourself looks bad; ignoring it also looks bad. Lose-lose.

Since I started being a more opinionated blogger, I’ve dealt with passive-aggressive attacks maybe five or six times. Today, I wanted to share with you a few things to keep in mind when dealing with it:

Not every post that seems to be passive-aggressively attacking you is actually about you. Sometimes, multiple bloggers all talk about the same subject by happenstance. They aren’t replying to a post you’ve written. Other times, the blogger was inspired by your post, but didn’t mean their own post to come off as passive-aggressive. They just wanted to voice their own opinion too.

Whether it is me, personally, or my opinions, I don’t like feeling attacked, but it is something to keep in mind – someone can like you as a person, but still disagree with you. It’s a much better situation when there’s an open debate, a dialogue. If someone goes the passive-aggressive route, though, that doesn’t mean that they hate you. In fact, they might really like you and were afraid to comment on your site or link to your post because they were nervous about upsetting you.

Whenever I see a passive-aggressive post, whether it is directed at me or at someone else, I feel a little sad – not for the blogger being attacked as much a for the blogger doing the attacking. Again, lively debate is always a really productive thing, in my opinion, but when someone is clearly attacking another blogger (or even a reader), it tells me that they not only disagree, but they can’t see past their own opinion; they can’t understand people who don’t think the way they do. This is less about you being “wrong” and more about the other person being unable to accept an opposing viewpoint.

When someone attacks you , you aren’t forced to reply and you certainly aren’t forced to be snark. Take some time to calm down, remembering that you might be overly sensitive or emotional in the heat of the moment. Keep in mind that you have the option of replying to the other blogger in a private way. If you’re really hurt or offended, consider an email to discuss the matter before taking the argument public, especially if you have a relationship with the other person. If you do choose to reply publicly, think about all of the things that are upsetting you – and try to be better than that. In other words, if you feel like the other person is attacking you, don’t attack them in return. Try to take a more amicable approach that asserts your opinions without being catty.

That sounds horribly pretentious, but it’s true – to your blog, your people (i.e., your fans, readers, etc.) are more important than their readers. This is especially important if things turn nasty. If your people support you and enjoy what you’re doing at your blog, let a bunch of passive-aggressive jerks attack you elsewhere. Those are people who would probably never enjoy your blog anyway. It can hurt sometimes, to feel like people are talking behind your back, but just like everything on the Internet, it will pass.

I believe in seeing lessons in every debate – to me, it is just as important to learn as it is to teach. Often, when someone is passive-aggressive, they do have at least some valid points. They just don’t package it in a nice way. Try to pick through what they’re saying, discard the snarky nonsense, and figure out what they were really trying to say. We all have something to learn from one another.

Your turn – have you dealt with passive-aggressive bloggers in your niche? Do you have any tips to share for dealing with it?