Cameo Stars has just launched new cameos for the Top 11 American Idol contestants – allowing fans to have the finalists appear directly on their Facebook pages. 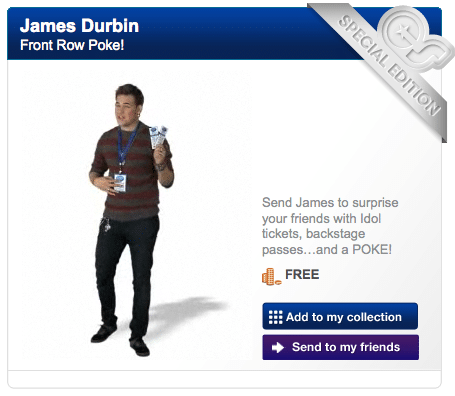 All social cameos will come to life directly in the recipient’s Facebook newsfeed in high definition with no background or borders, featuring each of the finalists in exclusive, never-before-seen content. You can have them give pokes or even sing Happy Birthday. Additionally, Cameo Stars will be offering one lucky fan a pair of tickets to attend the 10th season finale of American Idol.

“There is a feeling that it’s customized for you because it’s being delivered to you on your own page and because a character is walking toward you and talking toward the camera,” Olivier Delfosse, VP for interactive at FremantleMedia Enterprises, told Times.

Cameo Stars has already worked with celebs Kim Kardashian, Drew Brees and Dale Earnhardt Jr. – letting them make virtual cameo appearances right in your and your friends’ everyday lives, where they come to life right in your social network profile or mobile device.