Wow, this statistic surprised me. I’m not sure why, as I sneak a glance at my 3-year-old who is playing a game online. Maybe because he doesn’t go online every day. Now, my 9-year-old, that’s a whole other matter.

According to a recent report, conducted by education non-profit organizations Joan Ganz Cooney Center and Sesame Workshop, young children in the United States are increasingly hopping online and interacting with online media.

Mobile media appears to be the next “it” technology, from handheld video games to portable music players to cell phones. Kids like to use their media on the go.

Of course, different digital media interest children at different ages. About 20% of children age 4-5 use hand-held video games, building to 50% by age 9. And most children don’t start playing video games until age 6, or using portable music until age 8. 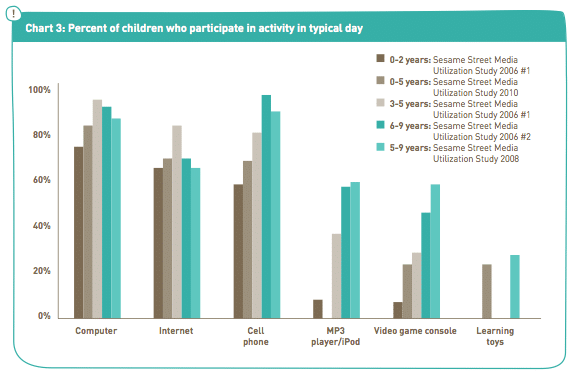 Television use dwarfs all types of media, including the Internet. The report shows that on weekdays, children spend at least 3 hours a day watching television. And preschoolers viewing television is the highest it has been in the past eight years. This may be part of the reason that Internet usage is so high in this age bracket. In one study parents admit that 60% of children under the age of three watch videos online.

Media consumption is also difficult to measure, because children are multi-tasking for several hours a day … listening to music while surfing the Internet, or texting while watching TV. In fact, according to the Kaiser Family Foundation, two-thirds of the time older children (7th to 12th grade) are on computers they are multitasking – listening to music, surfing the Web, and chatting with their friends using instant-messaging tools, etc!

The report, available at The Joan Ganz Cooney Center at Sesame Workshop also delves into what children are watching on television, and the deepening divide between lower-income and middle-class families obtaining technology.