I have to wonder what the future of “speech” is going to entail … at the very least, historians will have a wealth of information to dig through when it comes to the twentieth century. They won’t have to worry about the validity of stories being passed down through the generations. 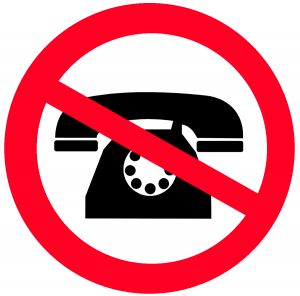 But are we losing the verbal word? Are future generations going to speak only through text and social media – messaging each other or posting updates even when they’re at the dinner table? I hope not, but I can’t help but think it’s a possibility. Especially when I see my 9-year-old preferring to email or chat online with a friend, rather than pick up the phone.

And I can’t really fault her. I’m the same way. I avoid the phone like the plague! So, I tried to figure out why the written word is my communication method of choice …

Multi-Tasking:
Unless you’re on a group phone call, you can’t have multiple conversations going on. But you certainly can converse with several people at once via texting, emails, or online chats. In today’s fast-paced world, it’s much easier to fire off a multitude of messages than to sit on a phone call. Just make sure you’re sending them to the correct people!

Keeping Track:
Email has become my task list. If an email is in my inbox (and not filed into a folder) – it requires some sort of action. If someone gives me a task over the phone, I have to write it down somewhere and then keep track of that task until it’s fulfilled. I could add it to an online task list, but it becomes another program for me to check.

The Ability to Message Several People At Once:
Who wants to have the same conversation multiple times? If I can send off one email to dozens of people, or post a Facebook or Twitter update to the masses, that’s saving hours off my day. I’m not stuck filling everyone in on what’s going on.

Keeping On Subject:
Let’s face it. Phone calls can quickly go off-topic. If you’re in a rush, sending a text or email gets you a quick and focused response.

It’s Noise-Free:
If you want to take a phone call during a meeting, you’ll have to step out of the room. If you want to answer the phone when your child is throwing a tantrum, you’ll have to barricade yourself in the bathroom. Using your phone to text or email is silent, and the person on the receiving end doesn’t need to hear your domestic drama.

The Ability to Edit:
Speaking can leave me flustered, especially if its with someone I don’t know well, or it’s a topic I don’t completely understand. When I’m typing it out, I can edit prolifically and do my research ahead of time. I’m never left unable to answer a question because it’s all at my fingertips.

The Ability to Censor:
Admit it, some people can rub you the wrong way. When you’re having a phone conversation, you have to have an immediate reaction. You can’t give yourself a five minute time out to cool down. At least not without completely changing the subject. With a typed response, you can censor your reaction and response.

Of course there are downfalls to using the written word to communicate … a lack of personal interaction, the ease in which someone can take something the wrong way, the longevity of the content (someone can use it against you forever!) … but that’s a different post altogether.

So tell me – do you prefer the phone or sending a digital message?