I have an iPad. I use it for a multitude of applications, including blogging. But the one thing that drives me crazy is the lack of a camera. I include an image in every single post, and it would be so much easier to snap a photo with the iPad instead of having to use a work-around! 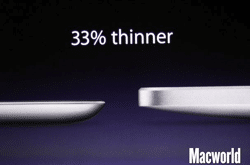 Of course I want the new iPad. Not for the memory or the thinner design (I actually prefer a bulky, sturdy version for my 3-year-old who likes to throw it across the room). Just for the camera.

But, for those of you who care about the other aspects, here are the details on the new iPad 2:

The price and color options will remain the same. And it

So when is it coming out? March 11th and the 3G model will be available on both AT&T and Verizon networks.

Will you be grabbing one?