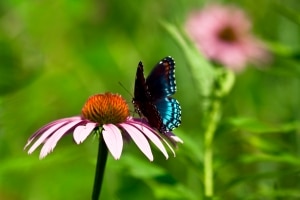 Given the name of this post, I wanted to have a picture of a fly. But ew, close up pictures of flies are nasty. Butterfly instead!

I think it is part of the human experience to wonder what other people think about us. For bloggers, keeping a finger on the pulse of  your readers is important if you’re trying to make money or increase your readership. If you get few comments, however, it is hard to know what people really think about you. Even if your community is vocal, its often the most violently upset or emotionally moved that comment, so you may only be seeing the extremes.

Figuring out what your readers really think about you and your blog is essential to community management, though. You can only best serve your readers if you know what they like and dislike. Here are some ways that I’ve found you can be a fly on the wall and get a bit of honest information about what your readers are thinking:

1. Set up a Google Alert for your name.

People mention other people all the time, but just because someone talks about you doesn’t mean that they link back to your site. Or, they could link to your homepage, so you don’t get the ping, but they don’t send a ton of traffic your way, so you don’t notice a spike and figure out where it’s coming from either. Google Alerts isn’t a perfect method, but it will help you see where people are mentioning you. Often, if they aren’t talking about you on your site, such as they would in the comments section of a post, they speak more freely about their thoughts about you be prepared for both positive and negative comments!

Also, avoid telling people that you found out something they said because you were googling yourself. It still sounds creepy, even if we all do it.

One of my favorite things to do is to see how other people have me categorized on Twitter. You’ll likely see a ton of people listing you according to your niche (such as on a list called “food bloggers” or “writers”), but you’ll be amazed with just how creative people can get with list names – and those names are telling. Are people calling you a teacher or guru or expert? That’s an awesome sign. Are people constantly listing you as something you’re not? You might be giving off the wrong impression. For example, it would be awesome to be on a list called “blogging authorities” if you blog about blogging. Not so awesome to be on that same list if you talk more about social media than you do about blogging tips. And if lots of people have you listed as someone who blogs about blogging, but your site is mainly about pets or dating or fashion or gardening or whatever? Well, perhaps you should reevaluate the links you’re sharing on Twitter and your tweets, because you might not be reaching the right audience.

People are often more vocal about your opinions when it isn’t on your site, and if you don’t have a ton of traffic, leaving comments on others’ sites is a great way to get some feedback about your ideas (as long as you’re actually adding to the conversation in a relevant way, not just spamming a popular site because you want attention). But often, we leave passionate comments and forget to actually check if there were any responses! Don’t be afraid to subscribe to follow-up comments on websites if you say something passionate. Worried about getting too many emails? Bookmark the site. I keep a bookmark folder of the last ten places I left comments. When I comment somewhere new, I bump the oldest one so the list always stays manageable, and at the end of the day, I check over these posts to see if I got any responses.

Ok, those are my best three tricks for finding out what people really think of you and your blog so you can better manage your own community – what are your best tricks?