Sometimes, I have to turn off the news. 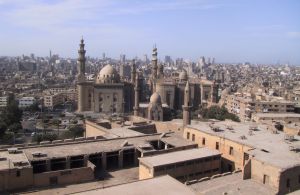 Reporters around the world are talking about how social media played a role in initially organizing the Egyptian protests. Twitter and Facebook certainly gave people a voice, allowed the public to organically organize without a clear leader or any kind of secondary agenda. There are Muslim groups jumping on the bandwagon now, but I do not believe that they should get credit for this – this was truly organized by the people.

The Internet has since been silenced in Egypt, with the government first limiting access to social media sites and then essentially flipping the switch, shutting down the Internet completely. One reporter for MSNBC who is actually in Cairo right now has said that it doesn’t matter anymore. What started as isolated protests organized online has become a country-wide protest. If you want to join the crowd, all you have to do is go outside and find a group of protesters.

What is happening in Egypt right now certainly isn’t the first time that a world event has moved me to tears. I feel small and helpless, watching protesters who are younger than me fight for what they believe is right and not being able to do anything to help them. I feel ashamed that I have trouble wrapping my head around what is going on, that I’m not a more savvy about what is going on in the world today and what has happened historically in other countries. I feel worried that our government won’t make good decisions because maybe there are no good options to choose. I feel sad that people are resorting to violence, and that innocent people who wanted a peaceful protest are getting hurt.

Sometimes, I just feel overwhelmed and I have to turn off the news.

Yet, I can’t. Social media has made it impossible to bury our heads in the sand, impossible to turn away when things get uncomfortable.

And that’s what people aren’t talking about right now. Certainly, the role social media has played in organizing protesters is important, but what about the rest of us? For us, social media is playing a much different role.

Social media has become a way for us to connect, to keep this issue at the forefront of our day, to talk about what is happening. Social media makes it impossible to just shut off the rest of the world and focus on our own lives. Social media reminds us that our problems are small and our reach is far. When we feel like we can’t do anything, as is the case for many of us right now in regards to the unrest in Egypt, social media gives us a voice. And an ear.

And maybe that is something we can do, even as we feel helpless watching police cars burn and crowds get bombed with tear gas on the news. We can listen. We can listen to one another and exchange ideas and debate one another respectfully about not only Egypt, but about other important topics as well. Maybe we can’t make the Egyptian government listen to their people, but we can learn from what they are doing wrong and bring those lessons into our own lives. We can all try to be the best people we can possibly be, and encourage others to do the same. We can blog about the issues that are important to us, we can comment when other people blog about topics that move us, and we can share what we’ve learned through social media.

We can’t turn it off so easily anymore. We can’t so easily live in a bubble, concerned only with the events that happen in our own backyards. The Internet has made the world a smaller place, and also a much bigger place. It is up to us to make it a good thing, to use social media to listen.

Let’s make it a good thing.