Despite being a political junkie, I am very hesitant to bring up anything related to politics when it comes to BlogWorld. However while geeking out on memeorandum tonight (Techmeme’s sister site for politics) I came across a story that I think emphasizes one of the great opportunities social media brings to all of us. 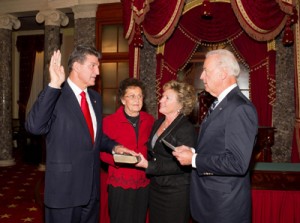 Senator Manchin took a lot of well deserved heat when he failed to show up for two major controversial votes this past weekend. His initial reply about having a prior commitment (a Christmas party) sounded like the typical weasel politician trying to avoid accountability and allowing himself to agree with whatever the popular position of the time was when the next election rolled around.

Then he did something different. He sent out two press releases declaring his position on each bill. And he gave an interview explaining exactly why he missed these votes (Audio Here)  and here is the story in the local paper including quotes from the interview.

So what can this incident and Senator Manchin’s reaction to it teach us about social media?

Let’s start by looking at what said:

“Let me apologize to anybody and everybody within our listening and reading areas. I’m very sorry for missing the two votes,” Manchin said during a conference call with reporters Tuesday.

He apologized for his mistake. We all make them. It is how we react when we make mistakes that makes the difference. Apologizing is step one.

Then he gives the context for the mistake:

Manchin says his oldest daughter is divorced and has one child from that first marriage. She and her ex-husband take turns when it comes to custody on the Christmas holiday.

“Last Christmas we were all together because we had all the kids on Christmas Eve and Christmas Day,” Manchin said. “This Christmas was the one where they get out of school this week and we won’t be with them this weekend.”

Manchin stresses before he left Washington he spoke with the sponsors of both bills and let them know he would not be present for the vote and how he would have voted if he were present.

“I was up front when I knew I would not be here on Saturday. I put that in the Congressional record because I didn’t want anybody to think that I wouldn’t make a vote or had intentionally missed a vote because it was a controversial issue,”

When you confront the issue and own up to it, add context that the offended party may not be aware of; it can completely change the tone of the conversation. After reading his explanation I felt sorry for the guy. I still thought he was wrong for missing the votes, but at least I can relate to his reasoning. It was a mistake that any rookie Senator could make and he was trying to honor a commitment to his family. Bottom line his position is reasonable and understandable where before everyone just thought he was a weasel. That is a huge difference in perception.

He went on the record in his press releases and in his interview:

For the record, Manchin says he would have voted against both bills.

He has completely eliminated any claim by future opponents that he missed the vote simply to avoid being on the record. No matter what your position may be about these two particular pieces of legislation, most people will respect him for that.

Finally he commits to not make the same mistake again:

Manchin says if the same situation were to arise on another holiday, he will be in Washington.

“In the future, I will make any adjustments and all adjustments that need to be made so that it doesn’t happen again,” he said.

He has held himself accountable, apologized for the mistake, offered context and background on why he made the decision he did. He acknowledged that even though his actions were well meaning, he was wrong and vowed not to make the same mistake again. He did this all very publicly.

Senator Machin just turned his customer’s perception of him (West Virgina voters in this case) completely around.
Of course Mr. Manchin is one of 100 United States Senator’s. He can get the press to publish his press releases and get interviewed for just about anything he wants to say.

The beauty is social media now allows every one of us and every business in the world to do the same thing. Do you have any similar stories to share that we can all learn from?

Please do in the comments.