Scott Stratten was the keynote speaker at BlogWorld 2010, and getting to meet him was definitely a cool moment for me, since I respect his work. Recently, I had a conversation with a friend of mine, and it led me to realize something important that I wanted to share with you:

Scott Stratten doesn’t know who you are.

And I would even go a step farther and say that none of these guys even cares who you are. 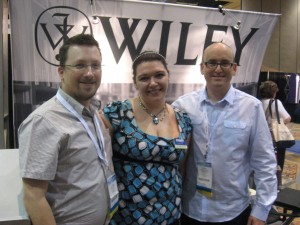 Do you know every single person online? Of course not. Even if you’ve been online longer than Peanut Butter and Jelly Time, you can’t possibly know everyone in your niche, even. Do you even know all of your Twitter followers? Unless you only have a handful, probably not.

So you sit there and fume that Scott Stratten (or whoever) doesn’t engage. “His entire stance on social media is that you have to engage with people. What a poser – he never once said anything to me, and I’ve been a fan of his for years. Waaaaaaah.”

Ok, I hope you aren’t actually being that melodramatic. Still, I think we all find ourselves thinking these thoughts. We feel ignored by people who, frankly, have no idea they are ignoring us.

If you do actively try to engage with any of these people (or the people you look up to within your niche) and they outright ignore you time and time again, ok. I stand correctly and they’re assholes. But I’ve never once met someone in the social networking/Internet marketing/blogging world who is like that. In fact, I never once met anyone considered to be “kinda a big deal” in their industry who is like that. You don’t get to be a “big name” if you refuse to acknowledge people.

Have you ever just tried being a friend? Have you ever walked up to Scott or Darren or Chris or Brian or (insert your favorite blogger here) and just said hello? I have.* And guess what? They know who I am now. Are they going to be my new bff in real life or even on Twitter? No. That’s just silly. Building a relationship is a slow endeavor. Meeting me once at a conference does not mean that they are now going to recognize every single thing I do or say. “Oh my god, I just tweeted that I’m going to bed. WHY HASN’T SCOTT SAID GOODNIGHT TO ME?!?!”

If you want someone to know who you are, 99 times out of 100 it is not their fault if they don’t. You want the relationship, so initiate it. These people all want to meet their fans…and more importantly, these people all consider you as a peer, not as someone on a lower level. They’re more than happy to get to know you if you actually take the time to get to know them, as a friend, not just as a follower. Say hello. Reply to their tweets. Comment on their blog posts in a way that adds to the conversation. Propose well-written, interesting guest posts for their blog, if they accept them. Write a blog post that names them in the title? I don’t know – do something to show them that you support whatever they’re doing. Y’all are creative people. Be creative.

I would like to make one other point before I leave you with your thoughts for the night, and to be honest, this point deserves a blog post to itself, which I’ll probably end up doing in the near future:

If your mindset is “What can he do for me?”, Scott Stratten may come to know who you are, but he will never care who you are.

And that’s true of anyone. Even me.

*Well, I almost. I never actually found Brian Clark at BlogWorld to say hello…hopefully next year!