Last week, one of the top stories from SmartBrief on Social Media was an article from the New York Times called “Search Takes a Social Turn.” The theory is that social networking sites, like Twitter, are taking traffic away from search engines because users can instead quickly poll their friends when they have a question, rather than turning to searching Google for the answer. Could we see a huge drop in search engine usage as social networking becomes more and more popular? 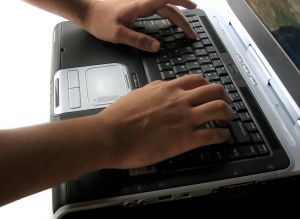 I don’t mean that you can’t trust the company or any other search engine for that matter. However, at the end of the day, your results are still automated and you have to weed out the most relevant sites. Let’s say you’re searching for “best restaurants in New Mexico,” for example. The results you get will most likely contain ads, restaurants near New Mexico, restaurants that are new and in Mexico, and other irrelevant sites. Even the top sites may not actually lead you the best restaurants as voted by fans or ranked by some kind of expert. Instead, they could very well be sites that have spent a lot of money optimizing themselves for the search term.

Your friends are going to give you their honest opinions on the best restaurants in New Mexico. They essentially act as a search engine result filter, and you can trust that what they give you is going to match your “search term” so to speak. Your friends are humans. Google’s search engines are not. This is not The Matrix. Yet. Humans – 1, Machines – 0.

When you “search” for something via your friends/followers, you have the chance to hold a conversation about the topic. For example, let’s say that you need to know the definition of a word. Instead of using a search engine, you ask your Twitter friends and someone replies to you with the answer. If you need further clarification, you can just ask. With a search engine, there’s no conversation with their results. If you need further clarification, you have to reword your search term and try to find it yourself.

The best part on a social networking site is that you have the ability to talk to multiple people at once about the topic. The conversation isn’t a one-way street, like on a search engine, nor is it even a two-way street. It’s a whole network of streets. Again, a win for the human race. Humans – 2, Machines – 0

There is one clear problem with using social networking to replace search engines, and it’s why search engines will never die. When you poll your friends, there’s a good chance, even if you have a million Twitter followers, that you won’t see any results. If no one knows how to answer your question or even has an opinion, you’ll hear crickets chirping and be stuck high and dry. On a search engine, that doesn’t really happen. Sure, you may occasionally type in something obscure that gives you no results, but in general, you’re going to get a list of relevant websites.

Plus, I’m guessing that most of you don’t have a million friends on any one social networking site. If you’re brand new, you might still be working on building up a following. The fewer people you have to poll, the less likely it will be that you get results. Unfortunately, it just takes time to build up your social networking sites. If you need an answer today, it doesn’t help you to wait a month until you have more connections. A search engine will give you results even if it is your first day using the Internet.

Even for easy-to-answer or opinion questions, you might not get a reply via social networking if you’re asking at an off hour when most of your friends are sleeping. Search engines don’t sleep. So, I have to give this round to the machines. Humans – 2, Machines – 1

Overall, humans do still come out on top, but the last factor probably needs to be more heavily weighted. Social networking may take away some search engine traffic, but we aren’t going to see Google or other search engines up and disappear because of this.

Still, the article is a good reminder – don’t forget to use the real people in your life when you’d normally type something into a search engine. If someone can give you a result, it’s likely to be better than the results list you’d receive via a search engine.

Check out the other top stories last week from SmartBrief on Social Media: